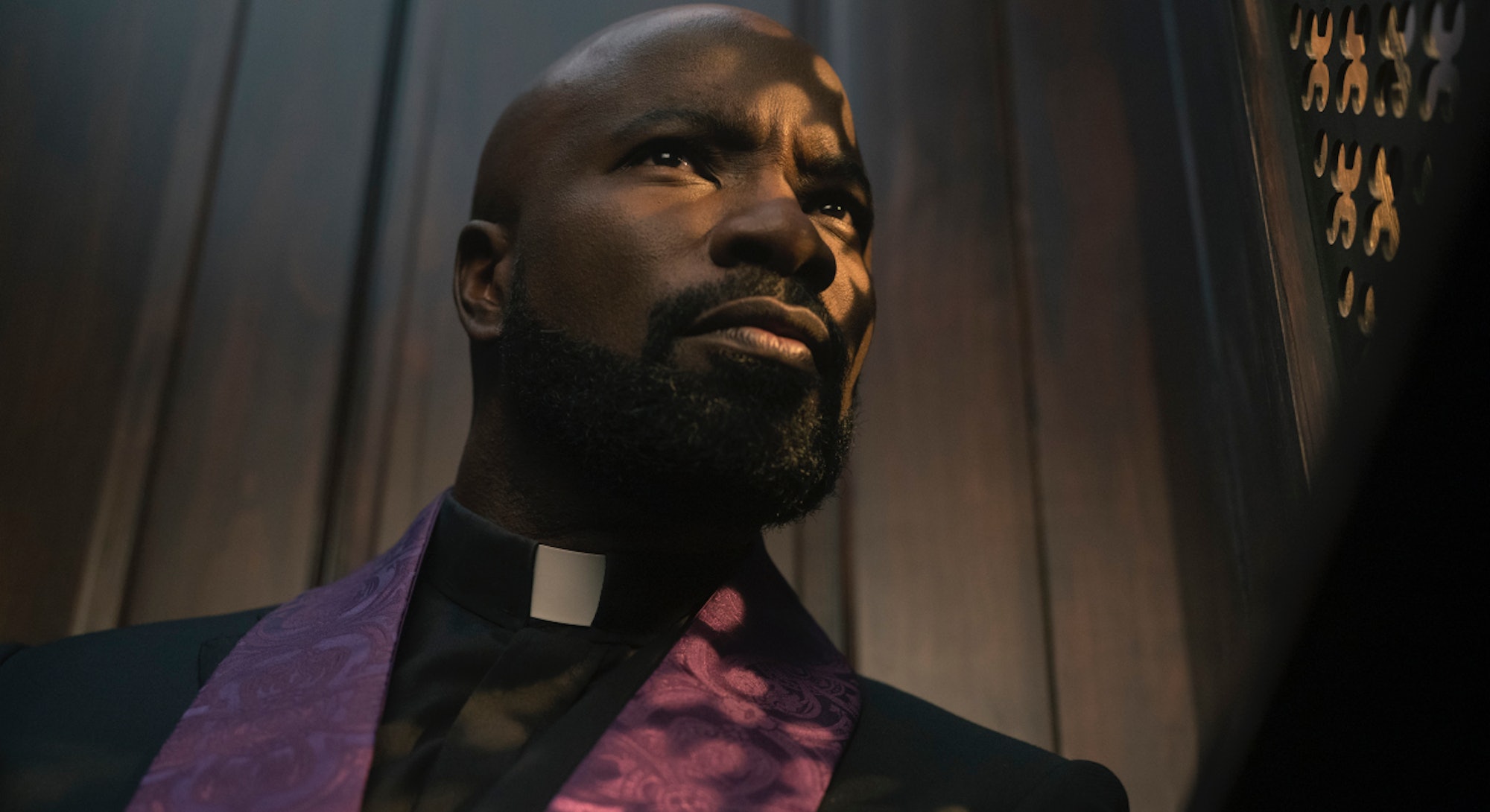 It is, unfortunately, the right time for Evil to return.

The world is still on fire. There has been yet another national tragedy that could have been prevented with sensible firearms regulation, an ugly celebrity defamation trial that will discourage others from speaking against abusers, and oh yeah, a pandemic that won’t end.

Evil, from producers Robert and Michelle King, reenters our screens just as we’re all questioning our faith in justice and our grip on reality. With Season 3, streaming on Paramount+ on June 12, Evil does more than pick up where last season’s eye-widening finale left off.

In the new season, Kristen Bouchard (Katja Herbers), Ben Shakir (Aasif Mandvi), and David Acosta (Mike Colter), the latter now a priest, once again perform their jobs investigating cases of alleged demonic possession. But they’ve all changed in some profound and difficult way.

And that’s not all. The mystery of RSM Fertility has revealed yet to Kristen how her daughter Lexis (Maddy Crocco) has been affected. And Leland’s hold over Kristen’s mom, Sheryl, has made her all too keen to rise up the ranks of a shadowy corporation.

Is war coming to Evil? The Kings don’t spill all to Inverse, but what they reveal is still enlightening.

“The thesis [of Season 3] is addiction and temptation,” Robert King tells Inverse, who says the de facto main character is David, now a full-time Catholic priest. “If Season 2 was in Kristen’s point of view dealing with evil inside her, this season is really about David, and how he wants to bring justice in the world within the Catholic structure.”

Robert King adds that David’s “lust for Kristen,” Evil’s version of a steamy romance between coworkers (made trendy by The X-Files a generation ago) will further challenge David and Kristen, who are both in committed relationships — of sorts.

“How are they gonna get out of that?” King rhetorically questions.

In conversations with Robert and Michelle King, as well as cast members Katja Herbers, Aasif Mandvi, Mike Colter, and Michael Emerson, Inverse breaks down what’s to come in Season 3 of Evil, still one of TV’s best cerebral mysteries.

The Kiss of David

As Evil fans saw at the end of Season 2, Kristen’s confession of murdering serial killer Orson LeRoux led to a steamy kiss between her and David, the culmination of two seasons’ worth of anticipation. This wouldn’t be a problem, except Kristen is married, and David is married... to God.

“David did something he shouldn’t have done,” Mike Colter tells Inverse, “Now he has to figure what that means moving forward.”

Colter adds David isn’t feeling his new life as a priest. “I don’t think David realized how boring priesthood could be,” he says. “It’s like marriage. You can warn people, but you never really understand it until you’re in it. And he’s in it. He’s going, ‘This is not what I thought it would be.’ He’s wondering how this is going to play out for the rest of eternity.”

It doesn’t help David is having some weird (and titillating) dreams, either. “David is slipping more into the world of the carnal, of the physical, a person losing his spirituality,” Colter reveals, “The fact he cannot see demons is where David is sort of losing his way. We’re trying to figure out how much of a target he is.”

Despite David’s best efforts, the underworld has David in its crosshairs. “When you’re trying to do the right thing, everything goes wrong,” says Colter, “His thing for Kristen has him exposed. I think the audience is going to like that, but it’s creating a real weakness.”

The Home of Kristen

David’s not the only one feeling trouble. Katja Herbers’ Kristen, who has finally put her guilt of killing Orson Leroux behind her, is now dealing with strange things in her own household.

“Season 3 is about evil coming closer to home,” Herbers tells Inverse, describing a new subplot involving unwieldy home renovations and Lexis learning for herself what beauty really means. “We’re now diving deeper into RSM Fertility and what happened with Lexis.”

There’s even more about the Bouchard household that needs fixing, from her marriage to Andy (Patrick Brammall) to an increasingly distant Sheryl (Christine Lahti). And yes, there’s the matter of David.

“I’ve kissed my best friend, a person I love and lust after,” Herbers tells Inverse of Kristen’s psyche in Season 3. “This third season is about losing David in a way.”

“Anybody who has added onto their house or done any construction knows that sense of something brought in you don't understand,” Robert King says. “We want to play with the idea of how much of Kristen’s life is being unsettled, and is it bringing something demonic?”

The Fear of Ben

Long Evil’s voice of scientific reason, Aasif Mandvi’s Ben is now finding himself shaken to his core. “He starts Season 3 being out to sea and looking for land,” Aasif Mandvi tells Inverse. “He’s trying to find sanity in the world.”

In the new season, Ben’s sister Karima (Sohina Sidhu) begins to get more involved in her brother’s cases, which Mandvi says is how Ben reclaims his once confident faith in science and objective truth. “He’s been in this world of David and Kristen. He’s supposed to be making sense of things, and nothing seems to make sense anymore. It’s really affecting his mental health and his perception of reality.”

“It's broken poor Ben's brain,” Michelle King says about Ben’s work for the Catholic church after two seasons. “It has left him shaken. He’s not used to having his beliefs shaken. He isn't quite sure whether he can be confident in what he believes.”

Adds Mandvi, “That’s a very scary thing. Ben starts this season where he just can’t. He throws up his arms. He needs to find equilibrium in some way.”

The Schemes of Leland

In Season 3, Leland has a different hold over the characters of Evil than he did before. While still pulling some strings, he’s now a willing lackey for the church, with unclear motives.

“Lackey is a good word,” Emerson tells Inverse, “He’s nibbling around the corners trying to insert himself into affairs and not even having success with it. But he’s persistent. He has a lot of irons in the fire. I’m amazed at how many places he can be in one day.”

Emerson says Season 3 sees Leland working a new angle, which sees him burn candles at both ends. “He’s going to work for the church and get on the inside, and he’s going to work demon business to keep tabs on Kristen’s family and David’s progress as a man of God.”

The Kings say Leland’s grip on Sheryl has also created a new avenue for the writers.

“The comic approach was to do an evil Working Girl,” jokes Robert King. “We’re following [Sheryl], we’re in theory cheering her on to move up the ranks, but the ranks of something evil. It’s comic and worrisome at the same time.”

The War on Evil

After three seasons, evidence is mounting that a supernatural evil does indeed exist in Evil. And it will take a lot to stop it. Is Evil gearing up for a fight?

The Kings don’t confirm if Evil will have mankind draw swords on the underworld. But conflict will always be a part of the series. “For certain it’s a spiritual one,” Michelle King tells Inverse, “There are forces trying to pull people away from God, and those trying to keep the church intact.”

“We use the spiritual as a metaphor,” Robert King says. “Leland is a perfect example. Is he demonic? Or is he a psychopath using the mythology of the demonic to spread evil? We all know from the news, there are people who just enjoy evil. They kill or spread manifestos. Is Leland that kind of danger, or is Leland more demonic? That’s the mystery of the show.”

Maybe we should ask Leland what he thinks.

“War is always going on,” Emerson ominously says, “But it's a guerrilla war. I don't think it has an end soon. But it's not out of the question. We’re in the skirmish portion now.”

Evil Season 3 will begin streaming on Paramount+ on June 12.