“What happened to your accent?”

“What happened to yours?” 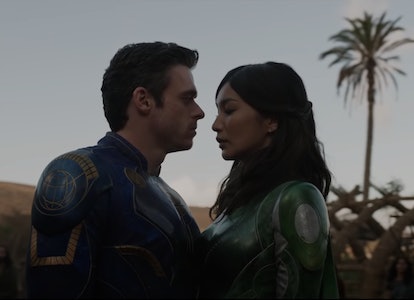 We all knew Eternals was going to be different. Chloé Zhao’s direction, the all-new characters, the millennia-spanning story — this Marvel movie pushed the envelope, at least by Disney’s standards, in more ways than one.

But one of the biggest changes made by Eternals to the existing Marvel formula took place in one of its first lines of dialogue. After an exposition dump explaining what the Eternals are, each of Earth’s protectors is “activated,” and Ikaris introduces himself to Sersi.

“I’m Ikaris,” he says, in a heavy Scottish brogue. “I’m Sersi,” she replies, in a British lilt. It may seem innocuous, but Eternals fixed a huge Marvel issue in its first moments, only to ruin this subtle shift with its final stinger. That’s right: we’re talking about accents.

Why do the Eternals have different accents?

Canonically, all the Eternals were “born” at the same time, entered human society at the same time, and all lived together for centuries. If that’s all true, why do they all speak completely differently? Sprite, Kingo, Phastos, and Gilgamesh all sound more or less American (actors Kumail Nanjiani and Don Lee were both born in other countries but later moved to the US), Ajak has a Mexican accent, Sersi and Thena sound British, Druig is Irish, and Ikaris sounds Scottish.

Why is this important? Of all these actors, only one — Angelina Jolie as Thena — is putting on an accent. The other characters sound naturally like the actors playing them. This is a huge deal for the MCU and a testament to Zhao’s naturalistic filmmaking style. Actors who’ve put on accents for past roles — Richard Madden and Kit Harington, for example, slipped into Northern English accents for Game of Thrones — are permitted to sound like themselves in Eternals.

Marvel and Accents: a History

Calling Marvel’s relationship with its actors’ accents complicated would be an understatement. For some characters, accents don’t matter at all. For example, Black Widow always had an American accent. Black Widow seemed to explain this away by saying Scarlett Johansson’s Natasha Romanoff spent her childhood in the US. But that reasoning doesn’t hold up when her “sister” Yelena (Florence Pugh) has a thick Russian accent, just like all the other characters adjacent to the Red Room.

Other characters have specific accents for their characters. Many actors in Black Panther adopted South African affectations despite being American or British, and Tom Holland and Benedict Cumberbatch both went full American to play Spider-Man and Doctor Strange, despite both actors being British. Even the Australian Chris Hemsworth plays Thor with a broad British accent. Wanda even acknowledges her accent disappearing in WandaVision.

Then, there’s the most frustrating category of MCU accents: space accents. According to Karen Gillan, the original Guardians of the Galaxy screen test for Nebula featured her original Scottish accent. Director James Gunn directed her to switch to an American accent, which is the one that makes the film’s final cut.

Eternals trusts its audience not to question why its characters all sound different; after the initial surprise of hearing them, you don’t really notice it. That is, until the end.

Yes, it’s time to talk about the pop star in the room. Eternals’ post-credits scene featured Harry Styles as Starfox, aka Eros, a fellow Eternal and brother of Thanos. It was a huge surprise for Styles to appear in the film, but not as surprising at what happened when he opened his mouth.

After a whole movie of British actors being allowed to coexist with American actors without any explanation, Starfox is revealed to sound American. Styles has only recently become an actor, so having him be one of the few Eternals doing accent work is... a baffling choice. He’s done American accents before, as part of his stint hosting Saturday Night Live, and this wasn’t exactly convincing. So why make him American?

If the MCU version of Starfox is Thanos’ brother, as it’s long been rumored, he could be American to match Josh Brolin’s accent. But even that explanation doesn’t really hold up to scrutiny, as Eternals’ accents are so wide-ranging.

Hopefully, Starfox’s accent is effectively tied into the character’s still-to-come backstory. Could Starfox be American because he spent time on Earth, living in America? Does he have some sort of special love for action films and modeled his persona after Hollywood stars? Hopefully, we’ll see the character reckon with this in future appearances with the Eternals.