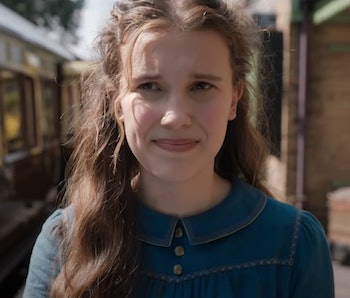 Like many people, I came to Sherlock through Netflix. The BBC series starring Martin Freeman as Doctor Watson and Benedict Cumberbatch as Detective Holmes in a modern-day setting introduced a new generation to the first superhero in Western fiction. Fast-forward a few years and Sherlock has run its course, but Netflix seems intent on recapturing that enthusiasm with a new take on the Sherlock Holmes universe ("Holmes-verse" trademark pending) in Enola Holmes.

Unfortunately, while Enola Holmes boasts just as much star power as Sherlock and a bit more fun, it can't match the BBC series where it matters most: the mystery.

From director Harry Bradbeer (Fleabag) and written by Jack Thorne (Harry Potter and the Cursed Child) based on the books by Nancy Springer, Enola Holmes takes Springer's invention of Sherlock's equally talented younger sister and casts Millie Bobby Brown in the title role. Henry Cavill plays Sherlock with sneering confidence that's on par with anything Cumberbatch ever served up, Sam Claflin embodies a particularly cruel Mycroft (the least cool of the Holmes siblings), and Helena Bonham Carter plays their mysterious mother, who vanishes in Act 1, leaving behind a trail of clues only her daughter can solve.

But the star of Enola Holmes is Brown, and she inhabits the role completely. If you're expecting the socially awkward superhero tween from Stranger Things, you've got another thing coming. Enola is funny with a dry wit, trading barbs with allies and villains alike — her under-explored dynamic with Cavill is particularly interesting. She's also got some serious fight moves (or a very convincing stunt double), and when she cracks each clue left by her mom without breaking a sweat, you really believe she's a Sherlock-level genius.

But that's sort of the problem. The success of any story in the Holmes-verse depends on its mystery above all else. And while Enola decodes plenty of hidden messages, watching her rearrange scrabble tiles or spin a letter-covered wheel is marginally fun the first time but quickly becomes a chore. Without getting too spoilery, there is a mystery at the heart of Enola Holmes, but the character solves it by luck and determination instead of her wits.

By depriving us of the experience of watching a Holmes solve a mystery, this movie fails in the one way it absolutely needed to succeed. And when Sherlock solves the mystery offscreen, it's almost like Enola Holmes is rubbing it in. Yes, there was an obvious clue everyone overlooked, but there's no way you could have seen it coming even if you were paying attention.

It's possible Enola Holmes doesn't feel the need to bother with a complex mystery because it's a "kids movie" with a 16-year-old star. But you're never too young to enjoy a good mystery, and this movie is sorely lacking that satisfying moment where everything clicks into place to reveal a series of clues you'll spend the next few days going over in your head.

At the end of the day, mysteries are hard to write. And good mysteries are nearly impossible. Maybe Jack Thorne just wasn't up to the task. We can't all be Rian Johnson.

Despite this complaint, Enola Holmes is a fun movie and as good a way as any to pass two hours on a cold autumn weekend. The cast is great, the pacing is brisk, and I'll never be bored by a story set in the smoky underbelly of Victorian London — even if that setting itself has become a cliché.

But will Enola Holmes be Netflix's next great franchise? Not quite as brainy as Sherlock and not nearly as engrossing as Stranger Things, Milly Bobby Brown's new movie likely won't be the high point of either her rising career or the Holmes-verse in general. But if Netflix does have plans for a sequel, I'll be happy to watch it, especially if Cavill and Brown get to share a few more scenes next time around.