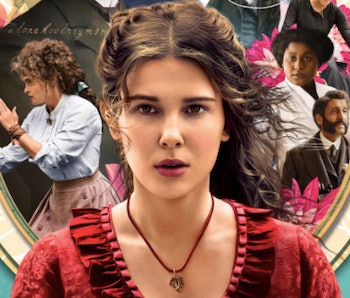 This article about the mystery film Enola Holmes was originally published on August 25, 2020 and updated on November 13, 2021 following the release of the season on Netflix. Read on for the original article, with some new changes to reflect the latest updates on this topic.

The game is afoot. Millie Bobby Brown has left Stranger Things’ 1980s setting behind for 19th-century London in Netflix’s Enola Holmes. The film, based on the book series by Nancy Springer, sees Sherlock Holmes taking a backseat to his sister’s keen detective skills.

Legendary Pictures announced plans to adapt Springer’s books back in February 2019, with Warner Bros. originally scheduled to release the film during the 2020 holiday season. However, Netflix acquired the movie back in April 2020 and released it later that year instead of a theatrical run.

In a press release, Brown shared her enthusiasm about stepping into the role of Enola.

“I love the fact that she can be very vulnerable yet even in her deepest despair she’s able to find herself again and fight back,” Brown said of Enola. “I admire her courage and her strength. She goes to pretty dark places but she never gives up. It’s a big journey for her. She’s quite naïve and comes up against forces that are way beyond her. So she has to find her own resources, her own voice even when there is no one around to help her.”

Here’s everything we know about the movie mystery Enola Holmes, including its release date, plot, cast, and trailer.

When was the release date of Enola Holmes?

Enola Holmes was released on Netflix on Wednesday, September 23.

What is the plot of Enola Holmes?

Here’s the full plot synopsis of Enola Holmes, per Netflix:

On the morning of her 16th birthday, Enola Holmes wakes to find that her mother has disappeared, leaving behind an odd assortment of gifts but no apparent clue as to where she’s gone or why. After a free-spirited childhood, Enola suddenly finds herself under the care of her brothers Sherlock and Mycroft, both set on sending her away to a finishing school for “proper” young ladies. Refusing to follow their wishes, Enola escapes to search for her mother in London. But when her journey finds her entangled in a mystery surrounding a young runaway Lord, Enola becomes a super-sleuth in her own right, outwitting her famous brother as she unravels a conspiracy that threatens to set back the course of history.

In addition to Enola proving that she’s just as good a detective as both of her brothers, the story tackles family dynamics and the changing tides amidst the fight for women’s suffrage and independence in Britain during the 19th century.

Who is in the cast of Enola Holmes?

Is there a trailer for Enola Holmes?

Why yes, there is! The film is directed by Fleabag and Killing Eve’s Harry Bradbeer, and his style is very apparent in the trailer as Enola talks directly to the audience. The trailer is also very whimsy and includes Cavill as a slightly stern version of Sherlock. Watch the trailer below!

Is there a poster for Enola Holmes?

There sure is! You can check it out below.

What did critics have to say about Enola Holmes?

Enola Holmes has a 91% rating on Rotten Tomatoes and a score of 68 on Metacritic. Millie Bobby Brown’s performance was particularly complimented.

Will there be a sequel to Enola Holmes?

Yes! In May 2021, it was announced that Enola Holmes 2 was in the works. Millie Bobby Brown, Henry Cavill, Helena Bonham Carter, and Louis Partridge are all returning for the sequel.

Enola Holmes is currently available to stream on Netflix.

More like this
Entertainment
Sep. 13, 2022
Everything we know about 'Dark' follow up '1899'
By Dais Johnston and Mónica Marie Zorrilla
Culture
Sep. 20, 2022
5 amazing sci-fi shows and movies leaving Netflix in September 2022
By Robin Bea
Culture
Sep. 17, 2022
You need to watch the most realistic apocalypse movie of the century on Netflix ASAP
By Jake Kleinman

This article was originally published on Aug. 25, 2020