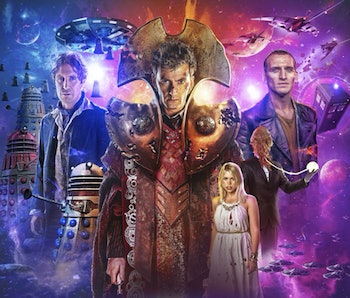 With Doctor Who in hiatus after a game-changing finale, the BBC isn't wasting a second creating new stories for fans to enjoy. Whether it's scripted content filmed in quarantine or new audio adventures, there's never a dull moment for a Doctor Who fan, but nothing could have prepared fans for what's coming next.

The BBC's latest announcement revealed a new wave of these auxiliary works known as "Time Lord Victorious." These works will form a collaborative storyline through many different forms, from comic books to escape rooms. Here's all you need to know about the upcoming multimedia event, from release date, to trailer, to plot and cast details.

What is Doctor Who: Time Lord Victorious?

According to the statement by the BBC, Time Lord Victorious is a Doctor Who story told entirely outside the actual television story, spanning "audio, novels, comics, vinyl, digital, immersive theatre, escape rooms and games." That's quite the smorgasbord of content.

What's even more exciting are the names attached: the Eighth, Ninth, and Tenth Doctors will all appear in this event. This is huge news, especially considering the Eighth Doctor only appeared as The Doctor onscreen once in a television movie and the Ninth Doctor was unavailable to appear in the 50th-anniversary reunion special in 2013.

Is there a trailer for Time Lord Victorious?

While there were plenty of fan-made trailers for the crossover event as a whole, there wasn't a concrete trailer. However, we've been given our first glimpse of what Time Lord Victorious has in store: a collection of new Big Finish audio adventures starring Christopher Eccleston entitled The Ninth Doctor Adventures, a four-volume set of adventures slated for a May 2021 release. While this isn't a part of Time Lord Victorious proper, it's the first peek into a new chapter in Doctor Who media.

Eccleston has never appeared in any audio productions. Instead, any "Ninth Doctor Chronicles" were narrated, like an audiobook, by longtime Doctor Who voice actor Nicholas Briggs, so this is a history-making moment.

Luckily, there is a trailer for these adventures, and it's quite full-circle, showing the new Doctor Who intro featuring the Ninth Doctor's name and image, paying homage to the classic intro, which always included the Doctor's face. You can watch that trailer here:

Who's in the cast of Time Lord Victorious?

Paul McGann, Christopher Eccleston, and David Tennant will appear in some capacity as the Eighth, Ninth, and Tenth Doctors. This may seem like a tidy consecutive sequence, but there's actually a glaring absence: the Eighth Doctor actually regenerated into a Doctor who didn't get put into the numbered set: the War Doctor, played by John Hurt in the 2013 50th anniversary special.

Unfortunately, John Hurt passed away in 2017, but before that happened he was able to record some audio adventures of his own. So while he won't appear in this media event, you can still check out the War Doctor's exploits alongside the new ones.

Aside from the Doctors, Rose Tyler, the companion who appeared in the first four seasons of Doctor Who, will make an appearance. This is curious, as Rose Tyler finished her run banished to a parallel universe with a half-human clone of the Tenth Doctor for company. It's unclear if she'll appear in the audio adventures or just the comics, but any appearance she does have will probably occur pre-banishment.

When is the release date of Doctor Who: Time Lord Victorious?

What's the plot of Doctor Who: Time Lord Victorious?

The BBC is keeping details very hush-hush at the moment, but the network let slip it will be set during the Dark Times at the start of the universe, as these three Doctors have to defend their home planet of Gallifrey from a villainous alien race.

This isn't much to go off of, but the villain will probably be new, a refreshing change from the mainstay enemies Doctor Who uses often, like the Daleks and the Cybermen. A Gallifrey-set story will also be interesting, especially considering the changes in Gallifreyan history brought about by the Season 12 finale.

How can I watch/experience Doctor Who: Time Lord Victorious?

This question is a bit more complicated than it first appears thanks to the wide variety of media involved with this event. It's unclear if you'll need to experience every aspect of the event to fully understand the story, but most formats will be available to purchase in the U.S.

The escape room and immersive theatre aspects of this event won't be as easily accessible. These events will probably be similar to the Doctor Who Experiences the show has introduced in the past and might only be available in the U.K.

In the Comic-Con panel for Time Lord Victorious, producer James Goss described how the COVID-19 pandemic affected production, pointing out the escape room and theatre productions as the events most likely to be put on hold. Lucky for American fans, the comics are on track, and the audio adventures were only changed a bit, forcing David Tennant to record his parts with his son's garage band equipment.

What Doctor Who episodes do I need to watch before Time Lord Victorious?

Most fans don't know much about Paul McGann's Eighth Doctor, so a good place to start would be the "Night of the Doctor" short film shown above. It provides a perfect lead up into "The Day of the Doctor" — the 50th anniversary special and the last time multiple actors reprised their role of The Doctor for a special event.

For those looking for a more retro experience, the 1983 episode "The Five Doctors" had all five doctors shown at that point join forces to save the day. It's old and very cheesy, but that's the roots of Doctor Who, and we'd be remiss if we forgot them.