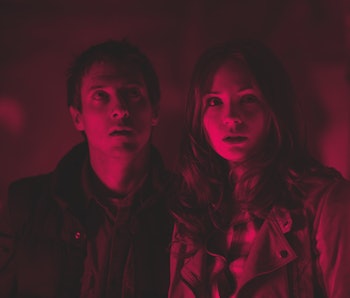 It's been about a month since Doctor Who finished its 12th season with a mind-blowing finale. With no more episodes until Christmas and the entire fandom stuck at home, the Doctor Who community got creative to occupy time with old episodes, and the writers are doing the same. In a YouTube release, iconic sci-fi writer Neil Gaiman penned a new short providing a glimpse into the fate of two beloved companions: Amy Pond and Rory Williams.

Last we saw Amy and Rory, they had just defeated a major Weeping Angels threat in New York when a final Angel in a graveyard took Rory. Amy, torn between traveling with The Doctor and living with her husband in the past, chose to follow Rory. It was a heartbreaking episode, especially knowing their return was impossible.

That was all we heard from Amy and Rory until just a few days ago. In anticipation of a community watch-along of Neil Gaiman's Season 6 episode "The Doctor's Wife," the Doctor Who Lockdown Youtube channel released an exclusive video entitled "Rory's Story" showing Rory Williams dictating a book to his adopted son, Anthony. You can watch the video below.

The video is only two-and-a-half minutes long, but there's still so much information to be gleaned. Rory and Amy seem to have a successful life in the '40s, and Rory says Amy "writes the Melody Malone books." Melody Malone is the detective heroine based on The Doctor's love interest and (through some time travel weirdness) Amy and Rory's daughter, River Song. It was always thought those were written by River, but this reveal means Amy is the face behind the pen name.

Rory is telling his life story for his expected adopted son Anthony on "the only working smartphone in the world," recapping the adventures so far, all of which we've seen in previous episodes of Doctor Who. He begins to start telling the story of "The Doctor's Wife," but gets interrupted by Amy, asking him to help paint the baby's room. Amy's cameo, even only a voice, is a monumental surprise, considering Karen Gillan's catapult to Marvel movie fame after her jaunt in the TARDIS.

The fact Rory and Amy adopt a child is also a huge revelation. It ties "P.S.," an unaired scene which was thought to be a non-canon bonus feature, into the actual canon — in 1946, Rory and Amy adopt Anthony Brian Williams, who grows up and visits Rory's dad Brian in 2012, just after Amy and Rory leave for the last time.

It's strange, and Brian wasn't expecting a grandson who was older than him, but Doctor Who has always been about finding family wherever you can. It's nice to see what we thought were lost members of the Doctor Who family thriving and helping people in this rough time.

More like this
Entertainment
8.1.2022 2:00 AM
Westworld Season 4 just copied one of the best Doctor Who episodes ever
By Ryan Britt
Entertainment
8.9.2022 1:00 PM
Has your favorite HBO Max show been canceled? The fate of 9 sci-fi series revealed
By Robin Bea
Entertainment
7.27.2022 4:15 PM
Everything we know about Rick and Morty Season 6
By Corey Plante
Related Tags
Share: