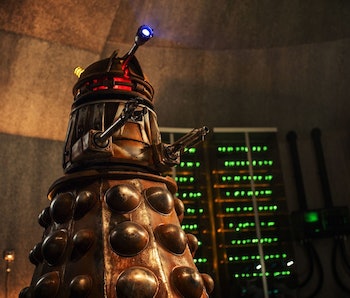 The Doctor Who universe was rocked in a serious way last night as the Season 12 finale introduced some massive revelations that will shape the direction of the series going forward. So what does the future hold for our dear Doctor, what can we expect from the upcoming holiday special, and what about that cliffhanger? Here are some of our biggest questions after that wild finale.

Major spoilers ahead for Doctor Who Season 12 episode 10, "The Timeless Children."

Still here? The big reveal of "The Timeless Children" was that The Doctor's entire past was a lie, implanted in her to perpetuate a creation myth. This provides a blank slate for future episodes about her true past as the first-ever Time Lord.

But let's not get ahead of ourselves. It seems the Doctor's homecoming will be delayed by an encounter with the Daleks the upcoming holiday special "Revolution of the Daleks."

What do we know about Revolution of the Daleks?

First, it'll air around Christmas or New Year's, as is customary for Doctor Who specials. Aside from that, we don't know much at all. However, the title holds more clues than it appears. Dalek episodes tend to follow a pattern: Remembrance of the Daleks, Victory of the Daleks, Genesis of the Daleks, etc. "Revolution of the Daleks" evokes the older naming conventions, meaning we have an old-school episode in store.

Will we learn more about the Doctor's past?

While it's clear the special won't be solely dedicated to The Doctor and her reckoning with her true identity, Doctor Who loves to use Dalek episodes to force The Doctor to come to terms with aspects of their identity. All the way back in 1975, the 4th Doctor time-traveled to the moment of the Daleks' creation and had a chance to destroy them completely, and in a powerful monologue, debated whether it was morally justifiable.

Every time The Doctor challenges the Daleks, they expose their true nature. With this new special likely dealing with warring factions of Dalek, The Doctor will get a chance to reflect on her own experience. Just like the Daleks, she too was experimented on, improved, and used to form a race that considers itself superior.

Tecteun, The Doctor's adoptive mother who conducted those experiments, will probably play a role as well. Seen only in glimpses during the finale, her research is what prompted the Shebogans, the indigenous Gallifreyan race, to become the Time Lords, the self-appointed elite time travelers. This creator role sounds similar to that of Davros, the founder and leader of the Daleks.

What about that cliffhanger?

Last night's finale ended with The Doctor taking a well-deserved breather in the Tardis, only to be rudely interrupted by the Judoon, the intergalactic rhino-headed police force. She's identified a fugitive, teleported to a jail cell on an unfamiliar spaceship, fade to black, roll credits.

Calling it a shock would be an understatement, but showrunner Chris Chibnall seems unrepentant in the choice. He told Radio Times, "We can’t leave the Doctor there! On that cliffhanger! Well, we did."

He also assured readers that "The Doctor and her friends" would return in the special. This may sound boilerplate, but it confirms the return of companions Yaz, Ryan, and Graham. It also suggests The Doctor's stay in Judoon custody won't be a major setback.

The crime for which she's being detained? That may be a bit more complicated. That's the issue with time travel, the crime could have been committed by a future Doctor, or even one we've seen before.

Doctor Who returns to BBC America this winter.