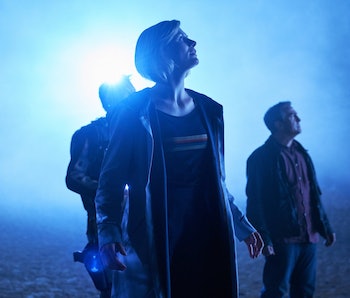 Doctor Who has always asked wild questions. Season 12 takes that impulse further than ever before. Previous seasons have consisted of standalone episodes with an overarching question that gets answered in the season finale. This time around, the show keeps asking questions. Now there's only 70 minutes left in to answer them.

All throughout Matt Smith's Season 5, The Doctor's adventures were rife with hints of cracks in space and time, from the episode with vampiric fish aliens in Venice to the one with cyberbug aliens in James Corden's house. All this led to the magnificent two-parter "The Pandorica Opens/The Big Bang," in which The Doctor made a magnificent speech and then rebooted the universe. It's your typical episodic adventure show ending in a Big Bad, except with more time travel.

This season seems to ignore that structure completely. There was an excellent two-part opener that seemed to address the theme for the season – the reemergence of The Master and the fate of The Doctor's home planet of Gallifrey. But episode 5 completely threw this idea out the window by introducing Jo Martin's Ruth Doctor. Suddenly, the biggest question was how there could be a new doctor when neither remember each other.

Last week's episode was the first part of the finale, and it added a third mystery to the mix, seemingly out of nowhere. In between segments of The Doctor and her companions helping a group of human survivors after a complete Cyberman takeover, the story would shift to 20th century Ireland to follow an orphan named Brendan through his life, which doesn't seem to end.

Showrunner Chris Chibnall will likely go one of two ways here. The episode could tie all the questions together; for example, maybe Brendan is the "Timeless Child" The Master warned The Doctor about, and he later regenerates into Ruth. It would require a whole new level of complication, but it's possible.

The episode could also just choose not to answer one of these questions. This would fundamentally change the show into one with story arcs spanning more than one season. If anyone could achieve this switch, it's Chibnall, given his experience running meticulously planned prestige crime drama Broadchurch.

Either way, the events of episode 10, "The Timeless Children", will decide Doctor Who's fate, and continue its evolution from educational kids' show to pop-culture sensation.