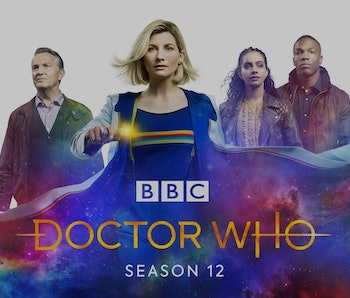 Sherlock and Watson, Jeeves and Wooster, The Doctor and the companion. Heroic duos seem to be a major export for the UK, especially the latter in Doctor Who. The casting of Jodie Whittaker as a female Doctor and Jo Martin possibly as the first Doctor of color has brought a whole new wave of fans to the 57-year-old BBC show, but there's more changes to the show than just the cast. Martin's character could reshape the whole Doctor-companion dynamic, according to an intriguing fan theory.

With the first 12 Doctors, the companions who assist them serve a crucially important role: the audience surrogate. When something mystical and time-travel related was happening in the TARDIS, the Doctor could explain it in layman's terms, almost condescendingly, to the companion and therefore the viewers.

It's a handy storytelling trick, but it has unintended consequences within the canon. The Doctor has lost many companions as collateral damage from their adventures. The past four companions have in some way died: Bill Potts' human form died, Clara Oswald was killed, and Amy Pond and Rory Williams succumbed to the Weeping Angels. While reappearances are always possible in the Doctor Who universe, the emotional toll is enormous.

This season, The Doctor is taking a different approach to her three companions: junior police officer Yaz, young apprentice electrician Ryan and his step-grandfather Graham. She rarely explains things to them, instead treating everything on a strict need-to-know basis, always tending to the matter at hand, never the big picture issues.

Reddit user HeNeverMarried suggests this is all intentional: The Doctor has lost so many people that this go around she's keeping a lot of her struggles secret, frustrating her companions. While past companions were well aware of The Doctor's sheer power, the Thirteenth Doctor treats her companions more or less like equals.

This leads to moments when this facade drops, like in "The Haunting of Villa Diodati." When faced with a Cyberman's ultimateum, The Doctor breaks, saying "Sometimes this team structure isn't flat. It's mountainous, with me at the summit, in the stratosphere alone left to choose." This throws Ryan, Yaz and Graham for a loop, but it's perfectly in character for how we've seen The Doctor grow over the course of the show.

These moments will sow distrust in the companions, and possibly even their departure. It's hard to travel with someone who treats you like an equal but secretly considers themselves leagues more powerful, no matter how correct they may be. Perhaps the old ways, when The Doctor was quick to keep companions in their lane, had a few upsides.

Doctor Who airs Sundays at 8 p.m. on BBC America.