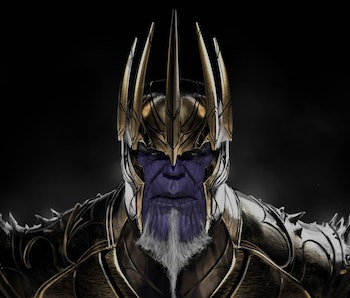 In the grand scheme of the multiverse, there is a dark reality where Thanos won and the Avengers lost. Now you’ll get to see that reality during your next family vacation!

At Disney’s D23 Expo on Sunday, Disney parks chairman Josh D’Amaro and Marvel Studios figurehead Kevin Feige announced a new, untitled Avengers-themed ride to Avengers Campus at Disneyland in Anaheim, California. The ride does not yet have an opening date.

As with many modern Disney attractions, like Guardians of the Galaxy — Mission: Breakout! or Star Wars: Rise of the Resistance, there is a canonical narrative woven into the experience. The attraction centers around the emergence of “King Thanos,” a variant of Thanos who came out victorious at the end of Avengers: Endgame. An ensemble of Marvel heroes from throughout the multiverse (along with riders joining in the experience) unite to stop him.

On stage at D23, Feige teased the attraction will let riders “battle alongside all of the Avengers against all the foes from anywhere, from any-when, that you can possibly imagine.”

Feige also extrapolated on King Thanos, a new character made for the ride. After pointing out his majestic crown and white beard, Feige added that King Thanos is “a Thanos that won, and the Avengers are not too happy about that.”

The Avengers meet the multiverse

No other details were unveiled, but Marvel did release concept art that confirms a few surprising heroes riders will get to see. While the likes of Captain America (both Steve Rogers and Sam Wilson), Spider-Man, Thor, and Iron Man are to be expected, they will also be joined by Phase Four heroes like Moon Knight, Ms. Marvel, America Chavez, and She-Hulk. Charlie Cox’s Daredevil also appears in the concept art, further cementing his place in the MCU. (He’s set to play a role in an upcoming episode of She-Hulk before getting his own Disney+ series.)

New heroes fans have yet to meet will also appear on the ride, including Werewolf By Night (whose Disney+ special was unveiled this weekend), Man-Thing, and a Gamora who has taken up the role of Black Widow. There will also be animated characters, like Spider-Man from the upcoming Spider-Man: Freshman Year and Steve Rogers from the first episode of What If...?.

The ride is sure to be a big deal, as it will not only offer an opportunity for fans to reunite with beloved lost heroes (like Steve Rogers and Tony Stark) but see them work alongside this new era of the MCU. It might also be a darker experience than appearances imply. While it’s sure to still be appropriate for families — it’s a Disney ride, after all — the mere presence of characters like Man-Thing and Moon Knight, as well as a Thanos who won, means that the MCU might explore its darker side through the attraction.

It’s also easy to speculate the ride can be considered non-canonical, or at least not based in the mainline movie reality known as Earth-616. The existing Guardians of the Galaxy ride exists in its own universe separate from the MCU, and the multiverse nature of this ride means that while it will have familiar faces, we shouldn’t expect King Thanos to show up in Avengers: The Kang Dynasty. Although, hey, anything can happen in Secret Wars.