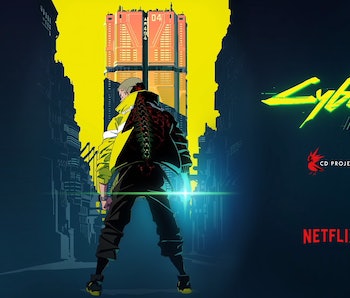 Developer CD Projekt Red used Night City Wire to reveal a ton of new details about Cyberpunk 2077 following two delays. While the gameplay reveals, like Braindance, were exciting, the most shocking announcement from the presentation was for a Netflix anime based on the game’s world called Cyberpunk: Edgerunners. But what exactly is Cyberpunk: Edgerunners, and when can fans of hardcore sci-fi anime expect it?

When will Cyberpunk: Edgerunners arrive on Netflix?

When Cyberpunk: Edgerunners was revealed during the first Night City Wire livestream, CD Projekt Red confirmed that it would be released sometime in 2022. A specific window within that year was not given. This release window also means that it will come out over a year after Cyberpunk 2077, so you shouldn’t have to worry about this being a rushed tie-in trying to hit a deadline.

Is there a Cyberpunk: Edgerunners trailer?

Not really. During the first Night City Wire, the show was announced with the above 2-minute documentary-style sequence. It doesn’t show any footage from the show itself, instead offering some interviews and tidbits from its creators.

Will Cyberpunk: Edgerunners be available on Netflix?

Yes, but it’ll only be available on Netflix.

Cyberpunk: Edgerunners is being created in collaboration with Netflix, so it’ll be exclusive to the world’s biggest streaming platform. It’s currently unknown whether the series will get a physical release, but it seems highly unlikely.

What studio is working on Cyberpunk: Edgerunners?

This studio is best known for its work on anime series like Kill la Kill and Little Witch Academia. Studio Trigger isn’t a stranger to working directly with video games either, as it created the opening animations for both Indivisible and Shantae and the Seven Sirens. Even within Studio Trigger, a dream team of the studio’s best is working on Cyberpunk: Edgerunners.

Hiroyuki Imaishi, who is known for directing Kill la Kill and Promare, is the Director of Cyberpunk: Edgerunners. Meanwhile, a tweet from Studio Trigger confirms that famous animators Yoh Yoshinari and Yuto Kaneko are in charge of character design for the project. Overall, Cyberpunk: Endgerunners is definitely in good hands.

A press release revealed even more of the crew behind the show. Masahiko Otsuka, known for Gurren Lagann, will be the Assistant Director; meanwhile, the show’s Creative Director is Kill la Kill’s Hiromi Wakabayashi. The show will be based on a screenplay from Yoshiki Usa and Masahiko Otsuka, who both worked on Promare. A score will be provided by Silent Hill and The Medium composer Akira Yamaoka.

What is the Cyberpunk: Edgerunners story?

The description of the anime’s reveal trailer teases the show’s premise: Cyberpunk: Edgerunners is a “story about a street kid trying to survive in a technology- and body modification-obsessed city of the future. Having everything to lose, he chooses to stay alive by becoming an edgerunner — a mercenary outlaw also known as a cyberpunk.”

The announcement video also confirms that it will be set within Night City and feature many new characters. We do not yet know if Cyberpunk: Edgerunners will occur before or after Cyberpunk 2077.

How many episodes will Cyberpunk: Edgerunners have?

Will Cyberpunk: Edgerunners tie into Cyberpunk 2077?

Studio Trigger seems to be distancing itself from direct connections to the game’s plot, so while there will probably be some minor connections and crossovers between Cyberpunk 2077 and Cyberpunk: Edgerunners, don’t expect a direct adaptation.

Cyberpunk: Edgrunners will be released sometime in 2022.

More like this
Entertainment
Sep. 13, 2022
Everything we know about 'Dark' follow up '1899'
By Dais Johnston and Mónica Marie Zorrilla
Entertainment
2 hours ago
Everything you need to know about HBO's The Last of Us TV series
By Corey Plante and Willa Rowe
Culture
Sep. 20, 2022
5 amazing sci-fi shows and movies leaving Netflix in September 2022
By Robin Bea

This article was originally published on June 25, 2020