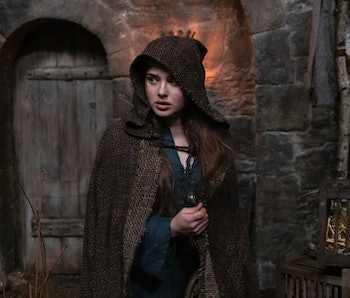 Netflix’s Cursed premiered on July 17 and quickly skyrocketed to the number one spot. The series, based on the novel by Tom Wheeler and Frank Miller, is a fresh reimagining on the legendary tale of the would-be King Arthur. With compelling twists and a detailed exploration of a familiar story, there are plenty of reasons why Cursed is so popular on Netflix right now.

Cursed upends everything we expect to see from the the story of King Arthur. In the Netflix series, Arthur (Devon Terrell) is nowhere near becoming king, still working to pay off the debts of his father and prove himself. Instead, the story focuses on Nimue (Katherine Langford), the Fey queen destined to become the mythical Lady of the Lake. Tasked with bringing the Sword of Power to Merlin, Nimue fights to free the Fey from being persecuted by the Red Paladins, Christian monks who harbor hatred for all magical beings.

Characters are familiar enough to get you situated, but benefit from intriguing tweaks that make their stories more than what you already knew. Morgana (Shalom Brune-Franklin), for example, begins her journey as Sister Igraine, a nun sent away to a convent by her and Arthur’s uncle. While there, she secretly dated another woman, helped the Fey escape through underground tunnels, and practiced healing magic.

Morgana has typically been portrayed as an villainous sorceress, so Cursed is refreshing in that vein. Meanwhile, Lancelot, the valiant and loyal knight, is a villain in the Netflix series. Known as the Weeping Monk (Daniel Sharman), he hunts the Fey and supports the Red Paladins. While he questions his own moral compass, he’s a traitor to his own people. Merlin (Gustaf Skarsgård), on the other hand, is more of a despondent wizard than a guiding light. These distinct takes on well-known characters help make Cursed a standout.

Cursed foregrounds characters of color and LGBTQ+ stories in a manner that's all too rare in the fantasy genre. The Netflix series offers ambitious commentary on oppression, the consequences of power despite good intentions, and the corruption of religious figures.

The show’s cinematography is also beautiful and bright, a stark contrast to other fantasy shows’ dark lighting (sorry, Game of Thrones). Netflix seems to have carved out a niche for itself with shows like Cursed and it makes for a great addition to its growing collection of fantasy shows, including The Witcher and Chilling Adventures of Sabrina.

Cursed isn’t without issues — the dialogue can be pretty clunky at times — but its intriguing riff on a familiar story certainly seems to have captured the attention of millions of Netflix subscribers.