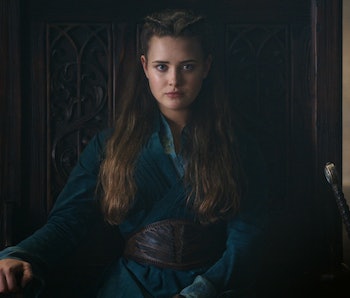 This article about Cursed was originally published on July 21, 2020 and updated on November 2, 2021 following the cancellation of the series. Read on for the original article, with some new changes to reflect the latest updates on this topic.

Cursed took a little-known character from the tales of King Arthur and reimagined her as the hero of the story. Katherine Langford’s Nimue, better known as the mythical Lady of the Lake, is the wielder of the Sword of Power in Cursed. Based on the novel by Tom Wheeler and Frank Miller, the live-action Netflix adaptation is full of valiant fights, wicked villains, heroic adventures, and the exploration of corrupting power and acceptance.

Season 1 of Cursed ended on a major cliffhanger that saw Nimue being struck down by Sister Iris, a scheming Red Paladin sympathizer. She’s now quite literally the Lady of the Lake, though it’s hard to ascertain whether or not Nimue is still alive. With so many of Season 1’s plotlines left unresolved while also setting up certain characters’ true identities (Lancelot, Guinevere, and Percival), Cursed has set the stage for an exciting Season 2.

Unfortunately, Cursed never got a chance to reappear on that stage, as Netflix canceled the show after just one season. Here’s everything to know about the decision and what Season 2 may have looked like.

Has Netflix renewed Cursed for Season 2?

Unfortunately not. In July 2021, Netflix quietly canceled Cursed after one season. The news is a smidge surprising, considering that the fantasy series was trending number one on Netflix when it premiered back in July 2020.

Why did Netflix cancel Cursed?

Netflix was under the radar with the cancellation announcement for Cursed compared to its other series, so it did not give a hard and fast reason for axing the series. It may have merely been that the viewership figures were not enough from Season 1 over time despite trending when it premiered. There also may have been some budget issues, considering both the number of shows Netflix takes on at any point in time and all the money that assumingly went into the medieval setting of Cursed.

What would the plot of Cursed Season 2 have been?

Though the resolution is never coming, Season 1 of Cursed left myriad plotlines unresolved. Nimue, now Queen of the Fey, has been shot with an arrow and is presumed dead. Meanwhile, Merlin, now wielding the Sword of Power, beheaded Father Carden, the leader of the Red Paladins (Christian monks who want to eradicate all of the magical and non-human people).

Arthur found himself fighting alongside the Red Spear, aka Guinevere, and the Weeping Monk—revealed to be Lancelot—has abandoned his post with the Red Paladins, riding off with young Percival following the death of Gawain, the Green Knight.

Speaking with Elle, actress Katherine Langford Had one thing in mind regarding exploring her character’s story.

“There’s a lot of talk about the sword this season, and I feel like it would be interesting to see just how deep Nimue’s powers go and what kind of untapped power she has within.”

Meanwhile, Devon Terrell, who plays Arthur, revealed that there’s still a “long journey ahead” for his character.

Will the Cursed graphic novel have a sequel?

Cursed the show is based on a novel of the same name. Written by legends Frank Miller and Tom Wheeler, the book was also one and done, with no other sequel series. That said, in the acknowledgments section of the book, Wheeler hints that another book might be planned. Here’s what he writes:

“I’m a lifelong Frank Miller fan, and this collaboration has been the unlikeliest of bucket listings… I’m so thankful for his trust, his wisdom, and his idea to ally Sister Iris with an army of killer children (a must for book two).”

When asked whether there will be a second book, Wheeler told Inverse to “Stay tuned.” Make of that what you will.

Cursed is currently available to stream on Netflix.