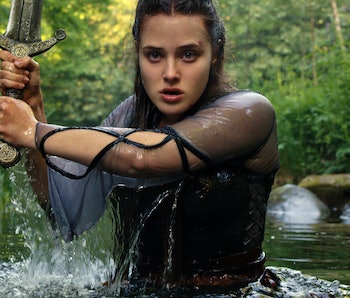 This article about Cursed was originally published on June 15, 2020 and updated on October 17, 2021 following the release of the series on Netflix. Read on for the original article, with some new changes to reflect the latest updates on this topic.

The story of King Arthur and his legendary sword, Excalibur, is iconic. The adventures of Arthur and his knights of the round table have been told for centuries, and the lore continues to hold our fascination. Now, Netflix is bringing to life a live-action adaptation of Cursed, which reimagines the Arthurian tales but is told from an entirely new perspective.

Based on the young adult novel by Thomas Wheeler, with illustrations by famed comic book artist and writer Frank Miller, Cursed is a modern twist on an old tale, centering on the legendary Lady of the Lake instead of King Arthur. In the vein of The Witcher, Cursed is a medieval fantasy series with all the elements to make it a memorable and exciting watch.

Here’s everything we know about the Netflix series’ release date, plot, cast, and more.

When was the Cursed Netflix release date?

Cursed premiered on Netflix on July 17, 2020. It consisted of 10 hour-long episodes.

What is the plot of Cursed?

We all know that King Arthur is the one destined to wield Excalibur. But Arthur is only able to pull the ancient sword from its resting place after asking the enchantress known as the Lady of the Lake for some magical assistance.

In Cursed, the script is flipped. It’s the Lady of the Lake, aka Nimue, who’s destined to wield Excalibur. In this retelling, following her mother's death, Nimue joins Arthur, a charismatic mercenary, on a quest to deliver the sword to Merlin and help defeat the evil Red Paladins and King Uther, aka Arthur’s father.

“Realizing these characters from page to screen was a unique and thrilling creative challenge. I think first and foremost when casting for Cursed, Frank [Miller] and I were looking for a mythological truth, actors who could bring the emotion and the humanity to legendary characters without losing the sense of elemental magic and epic stakes. Led by Katherine Langford, who is equal parts classic hero and sword-swinging badass, this extraordinary cast has brought such depth, commitment, and heart to this story. We can’t wait to introduce them to audiences around the world.”

Who is in the cast of Netflix’s Cursed?

Has a trailer been released for Cursed?

Yes, Netflix put out an action-packed trailer. You can watch it below!

Also, be sure to check out this gorgeous poster for the Netflix series.

Was Cursed canceled by Netflix?

Unfortunately, yes. In July 2021, it was announced by Netflix that Cursed had been canceled after one season.

Cursed is available to stream on Netflix.