“Look around you, you've got a cult in your town” 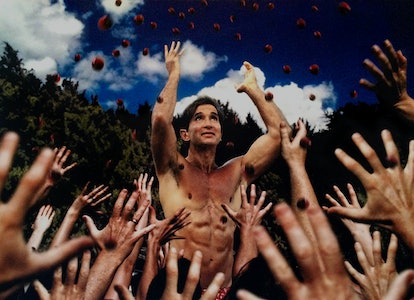 Cult documentaries are always told in hindsight. You can't watch Heaven's Gate: The Cult of Cults without viewing it through the lens of mass suicide, nor can you watch a documentary on the Branch Davidians without considering the Waco siege.

However, one cult documentary now streaming on Amazon Prime truly immerses you into the moments of the cult's peak through archive footage and shocking revelations.

Holy Hell follows its director, Will Allen, as he recounts his journey within the Buddhafield cult, a New Age religious sect that popped up in 1980s Los Angeles. Hollywood is a practical breeding ground for cults like this, as exemplified through the Source Family, Heaven's Gate, and Scientology. Hollywood is where you go to explore New Age beliefs.

It's also where you go to chase your dreams as an actor, which is precisely what Michel Rostand did. After a few bit roles in movies like Rosemary's Baby, he changed career paths and took on the role of a lifetime — cult leader. He rebranded himself as a yogi and spiritual leader named Andreas and began luring followers through his philosophy of spirituality, chastity, and purity.

Holy Hell doesn't center Andreas, instead focusing on Will's path in the cult along with his sisters. Will spent his years there documenting their activities on video, so every moment is shown as it happened. There are no re-enactments, just real people under real cult control.

Through more than 20 years, Allen shows every side of the Buddhafield — the forest retreats, the open-eye meditation, the intense one-on-one therapy, and the rampant sexual activity that lurked beneath the doctrine of chastity. After the Waco siege, Andreas was terrified of the interference of law enforcement and moved the entire group across the country to Austin, Texas.

It's then that things started to get weird. Andreas would control every part of his followers' lives, from what they bought to where they went. All followers had jobs they completed happily despite them feeling degraded by them. Will Allen’s job was to direct propaganda films purporting Andreas as a Messiah and serve as a personal masseur.

The strangest part of the Buddhafield is the obsession with art. The followers built an entire amphitheater from scratch for Andreas. He would choreograph large-scale ballets all the members were required to dance in, and he would always make himself the star. The cult created lavish sets, costumes, and choreography only to perform the ballets exactly once.

Many cult leaders have huge egos, but Michel Rostand takes that to a new level. According to ex-members, he would use his followers to test out plastic surgery before he would undergo the operations, and he would often wear false eyelashes. He was obsessed with external beauty for himself and others.

Unfortunately, the Buddhafield isn't the story of a kooky charismatic character and those who believed in him. It's the story of a leader who groomed and then preyed on his followers. Will Allen, in a moment of heart-rending vulnerability, exposes what Andreas really did to him, and then gets similar stories from others. There's no such thing as a harmless cult.

Usually, the end of this story would be the cult’s implosion and the relegation of its leader back into obscurity. That's not the case in Holy Hell. While I won’t give away too many details, the final sequence of the documentary is haunting and includes the best use of "Chasing Cars" in cinematic history.

While cult documentaries are usually fascinating, this personal story of a lesser-known cult reaches new heights of immersion. It may be an ugly story, but it’s presented in such a beautiful form, you won't be able to look away.

More like this
Science
6.20.2022 2:00 PM
The darkest sci-fi movie on Amazon Prime reveals a controversial robotics debate
By Tara Yarlagadda
Entertainment
6.27.2022 11:30 AM
You need to watch the scariest movie of the 20th century before it leaves Netflix this week
By Eric Francisco
Entertainment
6.19.2022 11:30 AM
You need to watch the best monster thriller of the '90s before it leaves HBO Max next week
By Mónica Marie Zorrilla
Related Tags
Share: