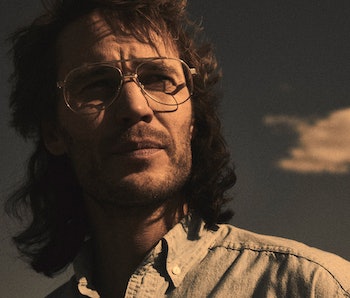 Everyone loves a redemption story, a tale of an ambitious person achieving their dreams, or an epic showdown for the ages. Stories of cults seem to hit all three of these categories. There's something fascinating to watching people fall under the influence of a charismatic leader, and seeing others realize the lie behind something they once believed passionately. This comes out in full force in this Paramount miniseries leaving Netflix on January 16.

Waco originally aired on the Paramount channel in 2019, but the miniseries found a larger audience after it became available on Netflix. It depicts the 1993 standoff of the Branch Davidians' religious center in Waco, Texas, where the Bureau of Alcohol, Tobacco, and Firearms attempted to search the center for suspected illegal firearms. The standoff led to a siege resulting in the deaths of 4 ATF agents and 76 Branch Davidians, including 25 children and the Davidians' leader, David Koresh.

With such a tenuous subject, a fictionalized adaptation is a tall task. If you make Koresh cold and unfeeling, then the plot doesn't feel believable. If you make him too sympathetic, the story could be accused of sanitizing the gross practices of Koresh, like taking multiple underage brides.

Waco attempts to solve this balancing act by adding another protagonist — Gary Noesner, the hostage negotiator brought in to attempt to de-escalate the standoff. In fact, David Koresh isn't a point-of-view character at all. The Branch Davidian side of the plot is told through David Thibodeau, played by Rory Culkin.

The source material for this series came from these two characters' autobiographies, so there's a real source of tension in fighting for the viewer's sympathies. This makes watching Waco a moral dilemma in itself. Even the viewpoint characters are in internal struggles. Noesner bargains for more time to try and convince Koresh to surrender peacefully, while Thibodeau realizes he's in over his head.

This can result in a muddied viewpoint for the series as a whole, but it goes to show how there are no clear cut winners and losers in history over six captivating episodes. Yes, the Branch Davidians' beliefs were wacky, but they were a group who found themselves treated inhumanely by the ATF when a negotiator was on hand to de-escalate. At the same time, the ATF were just trying to complete the task they had been sent to Waco to do, knowing the nation's eyes were on them.

The biggest selling point of Waco is the stellar cast. Culkin provides an understated 90s feel as Thibodeau, and Michael Shannon makes a meal out of every line of dialogue. Two-time Emmy award-winner Julia Garner proves her supporting actress chops yet again as Michelle Jones, a young bride of Koresh, and Supergirl herself, Melissa Benoist, plays her elder sister Rachel.

Though it may not be a perfect historical document, Waco is a fascinating case study in audience sympathies, family dynamics, and how perspectives can change a situation from moment to moment.

Waco is streaming on Netflix until January 16 in the U.S.

More like this
Culture
6.29.2022 11:30 AM
You need to watch the most subversive sci-fi love story on Netflix before it leaves this week
By Alex Welch
Culture
6.21.2022 4:00 AM
6 amazing sci-fi shows and movies leaving Netflix in June 2022
By Robin Bea
Entertainment
6.30.2022 3:25 PM
Netflix may have deliberately spoiled a huge Stranger Things death
By Dais Johnston
Related Tags
Share: