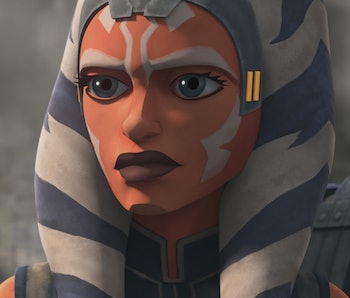 The Clone Wars is nearing the end of its run on Disney+, with the four-part series finale wrapping up May 4 to coincide with Star Wars Day. If you want to get caught up on all that's happened across the animated series's seven seasons, but don't have the time or inclination to watch the whole darn thing, you're in luck. A friend of Inverse has put together a comprehensive, color-coded roundup of every essential episode and story arc in the long-running Star Wars animated series. It's been setting our office Slack on fire, so we thought we'd share it with you.

You can find the view-only Google Sheet here. (We'd embed it to save you a click, but it looks pretty awful for those reading on mobile.)

The comprehensive document was made by John Arnst, a Science Writer at the American Society for Biochemistry and Molecular Biology. He's also a Star Wars fan who was keen to get his friends onboard the Clone Wars hype train. He says their response has been overwhelmingly favorable. "My friends have loved it! Which is all I'd hoped for, since I made it for them," Arnst says. He crafted the document to help his pals "understand what would be going on in Season 7 - like the many Ahsoka and Mandalorian arcs, some of which explain the Darksaber from the season finale of The Mandalorian." The Google sheet also highlights episodes that exemplify "what the show did for expanding the Star Wars universe, like the Mortis arc, which I think I've watched four times."

Even if you don't plan on binging a bunch of older Clone Wars episodes before tuning into the premiere, there are some pretty interesting takeaways to glean from just skimming over the spreadsheet. I'm a pretty big Star Wars fan, but Clone Wars is a weak point in my knowledge of the franchise. Here's 4 big things I learned from Arnst's handy cheat sheet.

4. Clone Wars fixes one of the dumbest things about the prequels

Revenge of the Sith, Obi-Wan memorably chops off Anakin's arms and legs and leaves him to simmer in agony in a pool of lava. It's a jaw-dropping moment. "You were my brother, Anakin," Kenobi tells his former Padawan tearfully. "I loved you."

Did he though? Hayden Christensen's Anakin spends much of the prequel trilogy being a total wang to Obi-Wan. That's not the actor's fault, but we're consistently told, rather than shown that these two are great friends. Instead, most of what we see of their relationship in Attack of the Clones and Revenge of the Sith is adversarial. They seem to barely tolerate one another, and Anakin frequently disobeys his master. Season 4 of Clone Wars, it seems, does a bit better job of selling the bond between these two.

3. Mandalorians get the spotlight in 8 episodes

We want more Mandalorian Season 2 info, but we're probably not going to learn much about where the story's going to go via official channels before new episodes start rolling out on Disney+ in October. This spate of episodes in Seasons 2, 3, and 5 could be just the thing for all the tinfoil hatters out there (one of us!) who are looking for clues about the future tales of Din Djarin, Baby Yoda, and the Darksaber.

Befuddled by how Luke manages to catch lightsabers and dredge up undersea X-Wings in The Rise of Skywalker? Gobsmacked to see young Anakin as a ghost in Return of the Jedi, but not young Obi-Wan? Frankly, a lot of things about the Jedi undead never made sense, but this is a George Lucas / Dave Filoni crafted explanation of how Light side Force users get to exist beyond death. Could it provide some kind of explanation for possibly bringing Ben Solo back to life? Probably not, but let the Reylo trash dream a little.

If we had to pick just a handful of old episodes that have piqued our curiosity most ahead of the Clone Wars Season 7 finale, it's these ones.

Sure, all of Star Wars is technically for kids, but I'm going to make a broad assumption here, and surmise that some people haven't tuned into Clone Wars and Rebels because they write it off as fluff intended for younger audiences. However, both shows touch on some pretty heavy themes, like death, the corrupting nature of power, and living with grief.

We have it on pretty good authority now that Sheev Palpatine, back in his pleasure-barge days and possibly even after, did indeed spread his seed to future generations, eventually (in a convoluted manner) resulting in the conception of his granddaughter Rey Skywalker. It seems The Senate wasn't the only one getting his swerve on during the prequel years: turns out, everyone's least-favorite Gungan had a ladyfriend. And she wasn't even the same species! Naughty indeed.

This comprehensive Clone Wars watch guide (you can find it here, again) isn't the first time Arnst has evangelized the virtues of the Star Wars animated series to his nearest and dearest. He says he recently treated his pals to an "hour-long PowerPoint presentation" about the show. "After I was done they roasted me about going way over my time limit, which I totally deserved," he adds.

The series finale of The Clone Wars airs May 4.