"The Chancellor has been a great friend and mentor to Anakin" 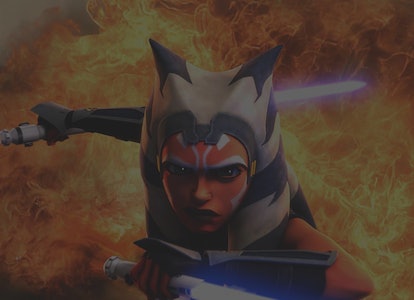 Supreme Chancellor Sheev Palpatine is the ultimate evil in the galaxy of Star Wars, but one thing that gets lost in all of his cackling laughter is the fact that Palps is really freaking smooth. How did he go from sly puppet master in the prequels to the rotting pile of flesh in The Rise of Skywalker?

Several scenes in the ongoing Clone Wars series finale have reminded us that widespread mistrust, hatred, and fear of Palps was not the norm. On the contrary, Palps was very well-liked back in the day. Unlike many real-life evil overlords, he didn't broadcast his evil intentions during his ascent to power. Good people like Ahsoka Tano were defending Palps on the last days of The Clone Wars, and If you don't understand why the people of the Republic loved Palps, you don't understand Star Wars.

Spoilers ahead for The Clone Wars Season 7, episodes 9 and 10.

The best moment in The Clone Wars finale, so far, comes when Ahsoka defends Anakin's pro-Palpatine stance. Taking a break from the stressful events of Revenge of the Sith, Obi-Wan tells Ahsoka that the Jedi Council has Anakin spying on Palpatine. Ahsoka's response is perfect.

"The Chancellor has been a great friend and mentor to Anakin. I can't imagine he's happy about this!"

But when Obi-Wan suggests that Ahsoka should talk to Anakin, she shuts him down, saying she's the wrong person to defend the actions of the Jedi Council. Can you blame her though? After all, Ahsoka was kicked out of the Jedi Order after she being framed for a terrorist attack she clearly didn't have anything to do with.

Ahsoka's kneejerk siding with Anakin is also a default vote of confidence for Palpatine. Mind you, this is the same Jedi Council that screwed Ahoska, so why should she assume they are making the right call by spying on Palps? It's yet another example of how Ahsoka and The Clone Wars Season 7 have made the events of Revenge of the Sith way more plausible.

Revenge of the Sith is great but sometimes unconvincing

Revenge of the Sith is an unsubtle film about subtle things. By the end of the movie, you have Anakin saying "From my point of view the Jedi are evil!" Then you've got Palps praising his own idea about the Republic being "reorganized into the first Galactic Empire." These moments are painfully on-the-nose, and the movie hammers it all home by showing Vader and the Emperor supervising the construction of the Death Star.

The sheer audacity of Revenge of the Sith's over-the-top conclusion tends to overshadow some pretty important factual details about the rise of the Empire. If you haven't watched it recently, you really should. Of all the prequels, it holds up the best because it fully commits to an operatic sensibility that no other Star Wars film comes close to touching. It's not always a "good" movie, but it works.

Even so, the political realism of Revenge of the Sith is muddled. We believe Palpatine can convince Anakin to learn about cool Sith stories, but because the audience is so firmly on the side of the Jedi, it's hard not to see the entire galaxy has total idiots.

In Sith, Obi-Wan says, "He [Anakin] was deceived by a lie, we all were." The problem is, Attack of the Clones and Revenge of the Sith only tell us about those behind-the-scenes deceptions, rather than showing them happen in real time.

Because Palpatine is already evil to the audience in the prequels, much of the potentially cool tension doesn't work as well as it should. Part of that is because the movies were made "out of order" and because Anakin, Obi-Wan, and Padme are the main focus of the story.

Clone Wars fixes that. Shifting the perspective away from this trio makes it clear why everyone would love Palps. In The Phantom Menace, Chancellor Valorum was a do-nothing, but Palpatine is a doer. (If you didn't know he made the Clone Wars happen, you might think he was doing a good job trying to end them.)

Ahsoka and friendly clones like Rex aren't exactly Rosencrantz and Guildenstern to Anakin's Hamlet, but close enough. Ahsoka is several steps removed from Palpatine, so she's able to have a point of view on the Republic that Obi-Wan could never have. From her perspective, the Jedi aren't evil, but they are jerks.

In a vacuum, Ahoska's mixed feelings about the Jedi and her support of Palpatine is super-smart writing. If literally every single character in The Clone Wars was throwing shade or rolling their eyes whenever Palps was mentioned, we would not be remotely convinced this guy could take over the entire galaxy. Having Anakin on your side is one thing, we know what happens to him, but the idea that Ahsoka is fooled by Sheev's charm in The Clone Wars is proof of his smooth-operator ways.

By the time we get to The Rise of Skywalker, Palpatine is a disgusting evil old space wizard, and his defining trait is just overtly being bad, genocidal, and dishonest. The idea that he could have followers or Sith Loyalists in the era of the First Order and the Resistance is laughable. But back in the days of the Old Republic, Palpatine was an elegant evildoer for a more civilized time. He doesn't even need any screentime in The Clone Wars to remind us of that fact.

The Clone Wars airs its final two episodes ever over the course of the next two Fridays on Disney+.