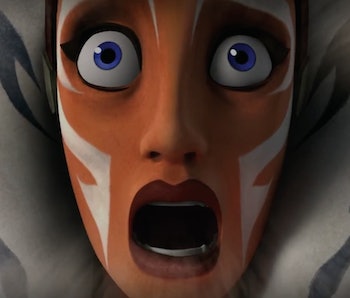 The circle is now complete! One of the most complex, thoughtful, and unique aspects of the Star Wars mythos has come to a close, but the final episode of The Clone Wars ("Victory and Death") might not be what you expected.

Because so much of this specific part of the Star Wars timeline is more or less carved in Beskar, barring a huge leap forward in time, The Clone Wars couldn't have dropped too many twists without changing some very sensitive mythology. And so, The Clone Wars ended exactly where it was supposed to.

And yet, the final moments delivered something unexpected. Here's what those ominous last few minutes meant, and why everything was always leading here.

Spoilers ahead for The Clone Wars Season 7 finale: Episode 12, "Victory and Death."

After a harrowing battle in which Rex uses the "stun" function on his blaster more than anyone in Star Wars ever has, he and Ahsoka barely escape with their lives after the onslaught of Order 66. Unlike Yoda or Obi-Wan in Revenge of the Sith, Ahsoka and Rex actually avoid killing any of their former comrades in arms, which, is a bittersweet victory because all these Clone Troopers die in giant starship crash anyway.

Rex and Ahsoka clearly buried all these guys after the crash, because we see Ahsoka looking out at rows of graves, each with a helmet of a Clone Trooper suspended on a stick. Some of the troopers are, of course, the same guys who painted their helmets to match the specific coloring of Ahsoka's face, making the whole thing super sad.

In Revenge of the Sith, Yoda, Obi-Wan, and Jimmy Smits didn't reflect much on how the people they'd worked with for so many years became faceless enemies in a blink of an eye. But this is a series about those people. It's called The Clone Wars for a reason, and in this final moment where Ahsoka reflects on all the bad stuff that's gone down, you really get a sense of closure for the clones, even if it wasn't a happy ending.

Ahsoka dropping one of her lightsabers is a pointed moment, too. If The Clone Wars is famous for giving the troopers unique personalities, it's equally famous for creating the personality of Ahsoka Tano — the Jedi Padawan we never knew Anakin had. True, Ahsoka has been around since 2008, meaning her status as a "secret" Jedi apprentice of Anakin might be pushing it a little bit, but it bears repeating because the ending of The Clone Wars honors Ahoska's importance in the Star Wars story in two very unique ways.

The first is the dropping of her lightsaber. Earlier this season, we saw Anakin give Ahsoka two upgraded lightsabers. However, in Rebels, she wields different ones, and when asked of her status and affiliation says defiantly: "I am no Jedi."

But more than all that, Ahsoka dropping her lightsaber is tragic because it's relatable. The Jedi have basically ruined her life. In Season 5 they kicked her out of the Jedi Order, and now, in Season 7, she witnesses the Clone Army turn around and tries to kill everyone. Unlike Obi-Wan or even Anakin, Ahsoka was a teenager on the young side when the Clone Wars began. From her point-of-view, the Jedi have always been generals, always fighting a war, and not the guardians of peace and justice she was promised. She's not 100 percent sure Anakin turned to the Dark Side of the Force, but she's not taking any chances. So she drops the lightsaber.

And then, an unspecified period of time later, Darth Vader picks that saber up.

It's a good guess that this last Vader scene is maybe a year or two after Ahsoka dropped her saber, and Vader has come to the planet to specifically track down Ahsoka. (Some time has passed, if only because the weather is different.) After Anakin became Darth Vader, we know one of his specific jobs was to hunt down and destroy any remaining Jedi who weren't taken out during Order 66. Clearly, that's what he's doing here, trying to track down the last known location of Ahsoka. The Empire was probably fuzzy on what happened to her, and on some level, Vader finding the lightsaber could be read as a false-clue that might have made him think she was dead. Was that also part of the reason why Ahsoka dropped the saber?

What does Vader think about this? Does he think Ahsoka died in this crash? Does he think she left some kind of clue behind intentionally? Does he remember his former friend and Padawan?

We know that in Rebels, Vader and Ahsoka do eventually cross paths (and lightsabers) again. But at this moment, all of that is in the grim future. It's early days for Anakin as Vader here (that might also be his first red saber on his belt if I'm not mistaken) and his silence tells us everything we need to know.

Yes, he's looking for Ahsoka. Yes, he, like the fallen Clones, has been given orders to betray his friend. But, on some level, you've got to think he's hoping he never finds her. This Vader seems contemplative. You can almost hear him say, just as Ahsoka heard in the previous episode; "What have I done?"

When Vader faces Obi-Wan in A New Hope he's gleefully evil and says "I was but the learner, now I am the master." But this Vader in the final scene of The Clone Wars isn't that cocky and cynical yet. This is all new for him and his Padawan learner is about to be a different kind of master, too. Just not the kind Star Wars has ever created before. Or since.

The Clone Wars is now streaming in its entirety on Disney+.