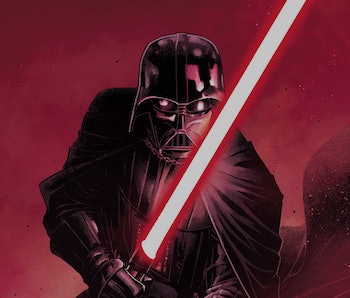 For so long, fans of Star Wars have only had theories as to why lightsabers wielded by the Sith were red. Putting aside cinematic reasons — they signal “evil,” like to bad cowboys in black hats in western movies — there was no actual in-universe reason why or how the Sith abandoned the hues of the Jedi. Fans also knew enough that the color change didn’t happen naturally; if it did, Anakin’s lightsaber in Revenge of the Sith would have been red during his fateful battle against Obi-Wan on Mustafar. But on Wednesday, a new Star Wars comic book from Marvel gives the answer.

In Darth Vader #1, the first issue in the second volume from writer Charles Soule (Daredevil), Emperor Palpatine tells Darth Vader (and readers) why Sith lightsabers glow red. And, to almost no one’s surprise, it has to do with pain and torture.

Set immediately after 2005’s Revenge of the Sith, Darth Vader #1 has a scene between Palpatine and Vader where the former orders the latter, his student, to construct his new lightsaber. As a Sith, however, things are different. “Do you know why our blades are red, Lord Vader?” Palpatine asks. Vader says no, because the teachings on the subject were “incomplete.” Palpatine responds that “the fools” sealed this knowledge because they found the truth “uncomfortable.”

“A red saber is no different than any other,” says Palpatine, “except, it has been made to bleed.”

Star Wars fans know lighsabers are powered by Kyber crystals, rare “Force-attuned” crystals that grow naturally on planets throughout the galaxy. Palpatine says Kyber crystals as “alive, in their way” and can feel pain. He then reveals that Sith lightsabers are made from Kyber crystals stolen from Jedi. The crystals are then “tortured” to the point they become corrupted and glow red, which reflect the Sith’s rage. He says exactly:

“Through the Dark side, you must pour your pain into the crystal. And when, at last, the agony becomes more than it can stand … a beautiful crimson. The color of your rage.”

It’s fascinating to know that even in a galaxy far, far away, the Jedi and the Sith seem to agree in color psychology.

In an interview with IGN, Soule said Vader’s red lightsaber origin will be the first arc in Volume 2 of his acclaimed Darth Vader series for Marvel. “[W]e end up with a character who is known as having this iconic sword, like his magical red sword, but he doesn’t have it yet. So what better way to start a big huge series than with a quest for a magic sword?” Soule told IGN. “We’re going to explore the mythology around lightsabers to some degree, which will be very fun. I’m really lucky that I get to tell that story. Seems like a big piece of the puzzle for him.”