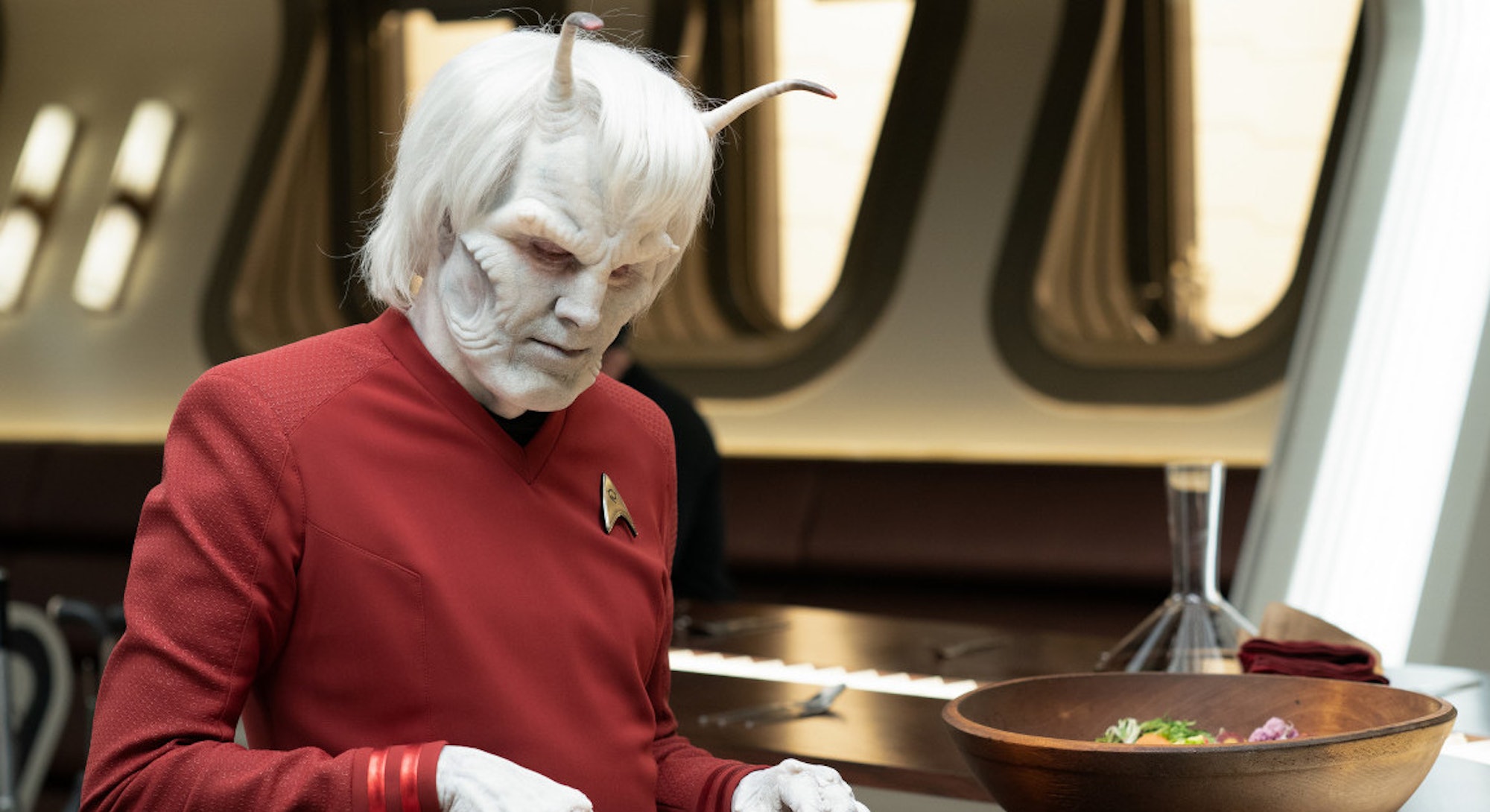 A blind engineer is running the engines of the Starship Enterprise.

If that sounds familiar, it should. Bruce Horak’s new Strange New Worlds character, Hemmer, is the second blind chief engineer to be a series regular in Star Trek. Back in The Next Generation, LeVar Burton played famously played Geordi LaForge, but the difference is simple: Horak is legally blind in real life.

Just before Strange New Worlds aired its second episode, “Children of the Comet,” Inverse caught up with Horak to discuss how Hemmer is like a certain Marvel hero and what makes him “so different” from any Trek character before him. Spoilers ahead.

“Hemmer can see way better than I can,” Horak tells Inverse. “He’s like Daredevil and has that little Daredevil moment in that first scene. Only if his telepathy were messed up would he be in real trouble.”

As Spock (Ethan Peck) says in the episode, Hemmer’s other senses “compensate” for the fact that he’s blind, which includes a sense of telepathy. The “Daredevil moment” Horak mentions is when Spock chucks a carrot, and Hemmer catches it without looking. Uhura (Celia Rose Gooding) is impressed, and Hemmer is cranky that she’s trying to treat him like an invalid.

“He’s written really well,” Horak says of Hemmer’s blindness. “I had no notes, especially that first scene with Uhura where they touch on the impairment. And he just brushes it off and shows off his incredible skills.”

In Trek canon, Strange New Worlds happens before both The Original Series and The Next Generation, making Hemmer not only Scotty’s predecessor in The Original Series but also — chronologically speaking — the first blind chief engineer of a starship named Enterprise. He’s also the first actor since 2005 to play a member of the Aenar — a subspecies of the Andorians first introduced in the prequel series Star Trek: Enterprise.

A lifelong fan of Trek, Horaks says he studied the performances of Andorians and famous character actor Jeffrey Combs, who played the Andorian Shran on Enterprise.

“Oh yeah, you’ve gotta give a nod to him,” Horak says of Combs’ performance.

He adds, “But I really trust the writers. So much of my background is in theater, in disposable performance. Every time I do this, it’s getting written in stone. It’s creating canon. It’s terrifying. It’s a bit like the first time you ever pick up a pencil.”

In addition to thinking of Hemmer as a blind superhero in the mold of Marvel’s Daredevil (but in Starfleet), Horak also draws a very specific distinction between this chief engineer of the Enterprise and every other person who has occupied this position before.

“There are so many engineers in Trek. They're all incredibly skilled and capable,” Horak explains. “But you know, he’s a pacifist, which I don't believe any of the other engineers had ever expressed. They may have been maybe in action, but I don't believe they actually outwardly stated that. And that’s one of the Aenar things; they’re pacifists. And that really touched home for me.”

As the new resident engineer on the Enterprise, Horak will be required to pull off technological miracles on the fly constantly. “Children of the Comet” is only the tip of his Aenar antenna, and Horak promises that as the series goes on we’ll find out a lot more about Hemmer.

“There’s a really soft side to him,” he says.

If there’s one defining, overriding constant in all of Star Trek, it’s that the action heroes are always trying to avoid senseless brutality. And in this very specific way, Horak thinks Hemmer embodies the Gene Roddenberry idealism of Star Trek’s ethos perfectly.

“It’s a very powerful statement that the engineer of the flagship that's responsible for moving this thing through the cosmos is a pacifist,” Horak explains. “It speaks to the real heart of Roddenberry's vision; that we're going to find another way. That we're going to find diplomacy or that compromise. Or maybe, just maybe, we leave people alone. I think that’s pretty great.”