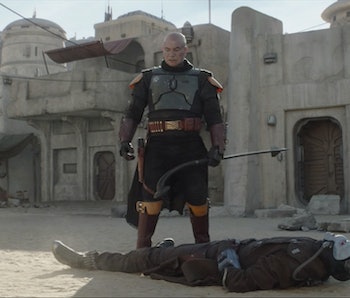 Boba Fett is a popular guy. When the new daimyo of Tatooine has to gather an army to fight off the Pyke Syndicate, he doesn’t need to look far. First, there are the mod kids (the Space Biker Teens) who serve at his pleasure, along with Black Krrsantan and Fennec Shand. Mando is eager to help when Boba asks. Even Cobb Vanth and the citizens of Freetown, previously known as Mos Pelgo, sign onto the cause after an unfortunate visit from Cad Bane.

But did Boba exhaust all of his options? There’s one glaring absence that’s only further highlighted by the Season 1 finale’s climax, a moment that recalls one of Dune’s biggest lessons.

Cad Bane may be a late addition to The Book of Boba Fett, but he quickly became the main antagonist. Working for the Pyke Syndicate, he does the dirty work of keeping the spice trade active throughout Tatooine. That means shooting Cobb Vanth, mortally wounding his deputy, and threatening Boba Fett.

After a rough interaction involving a rancor and Scorpenek annihilator droids, it looks like Cad Bane is finally going to take down the bounty hunter who once looked up to him. But instead of giving up, Boba taps into skills Bane doesn’t know about — his gaffi stick combat he learned during his years with the Tusken Raiders.

While the climactic moment was an excellent twist that referenced Boba’s Tusken past, it begs a key question: Where were the Tuskens during this entire battle?

The Pykes obliterated the tribe that took Boba in (after enslaving him) under the guise of a speeder gang attack. But there’s far more than one tribe across the Dune Sea. We even saw another group of them in the Mandalorian Season 2 premiere.

Boba Fett’s interactions with the Tusken Raiders are in some ways similar to Paul Atreides’ relationship with the Fremen, the desert-dwelling people of Dune. While many argue over whether Paul is a white savior, the Fremen are given more agency in Dune. In contrast, Star Wars historically treated the Tusken Raiders as plot devices. Boba Fett at first seemed to be avoiding this trope, but its finale uses the Tuskens — symbolically through a gaffi stick — to save its protagonist. Any vindication felt in that moment is reserved only for Boba, not the desert-dwellers who had once again saved his life.

It leaves us wondering why Boba couldn’t approach another tribe of the Tuskens, explaining his situation and why he needs help. If the Pykes got in the way of one tribe, there’s a good chance others would have something to gain by defeating them. What’s more, involving Tuskens in this battle would further underline the city/country dichotomy illustrated in the finale’s scenes between Drash and Jo, the young girl from Freetown.

Drash and Jo are not that different, even though they are from different areas of Tatooine. If they were fighting alongside a Tusken girl, they would have to confront their prejudices about their fellow Tatooineans, just like the people of Freetown had to do in The Mandalorian. It’s clear villagers and Tuskens can work together toward a common goal. So there’s little reason why the Tuskens didn’t get an invite.

Considering how we’re not going to leave Tatooine any time soon with Obi-Wan Kenobi on the horizon, this shouldn’t be the last we see of Tuskens. Hopefully, next time they’ll get a more meaningful role in the greater narrative than just the caretakers and trainers of the great hero.