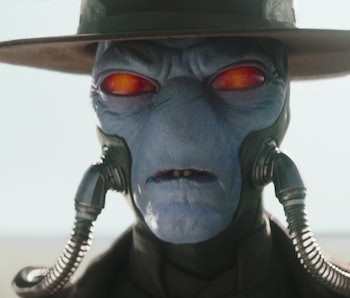 To say that The Book of Boba Fett isn’t the show Star Wars fans expected it to be would be an understatement. In its fifth and sixth episodes, the series has turned its attention away from Temuera Morrison’s Fett and placed its focus on several characters from The Mandalorian. While that’s helped cement Book of Boba Fett’s place within the larger Star Wars canon, it’s also made the series feel even more uneven than it did in its first four, filler-heavy installments.

Beyond that, the series’ increased focus on the relationship between Din Djarin (Pedro Pascal) and his foundling child, Grogu, has muddied the tonal, thematic, and narrative intentions of The Book of Boba Fett. What was meant to be Star Wars’ first gangster thriller has become something else.

To make matters worse, two standout scenes in The Book of Boba Fett Episode 6 prove the show didn’t have to go in the direction it has.

Two Deadly Incidents — Near the end of The Book of Boba Fett Episode 6, Cobb Vanth (Timothy Olyphant) finds himself standing face-to-face with Cad Bane (Corey Burton), the fearsome Clone Wars bounty hunter who the Pykes have hired to help them establish control over Tatooine. The standoff that ensues is shot, written, and edited to feel like something pulled straight from a Spaghetti Western.

The sequence pulses with the kind of tension that no other scene in The Book of Boba Fett has exhibited. What’s even more impressive is that the feeling of dread established during Vanth and Bane’s showdown carries over into the episode’s very next scene, which sees Garsa Fwip’s (Jennifer Beals) club bombed by the Pykes in what feels like a direct homage to the bombing scene from Brian De Palma’s 1987 gangster classic, The Untouchables.

Put together, the two scenes bring The Book of Boba Fett closer to being the kind of crime show it was sold as prior to its premiere.

All-Out War — Across its first four episodes, The Book of Boba Fett dabbled in telling an actual crime story in the moments when Boba went out and met with Tatooine’s other leaders or handled street-level disputes. However, those same episodes also spent more time unnecessarily filling in the gaps in Boba’s past than they did moving his story forward. When the show’s reliance on flashbacks ended in its fourth episode, fans understandably assumed the series was finally going to start telling the Tatooine takeover story they tuned in for in the first place.

Instead, The Book of Boba Fett Season 1 has essentially become The Mandalorian Season 2.5, picking up where the latter left off in order to set its characters up for their next adventures. While the series’ most recent episodes have been well-made, there’s no denying that most of what’s happened has had nothing to do with the show’s central Tatooine story. They’ve been narrative detours that upended the series’ priorities for two weeks straight.

The Book of Boba Fett Season 1 has tried to be two shows at once: a story about one bounty hunter’s rise to power on Tatooine, and a new mini-season of The Mandalorian. But the stories Boba Fett and Mandalorian are attempting to tell couldn’t be more unrelated, which makes blending them together a foolhardy decision on the part of the show’s creative team.

So far, that choice has resulted in The Book of Boba Fett being disappointingly disjointed and ineffective as both a space adventure show and a crime thriller.

The Inverse Analysis — With one episode left to go in its first season, it’s possible The Book of Boba Fett will stick its landing and bring its various story threads together. But no matter what The Book of Boba Fett does in its Season 1 finale, it won’t be able to retroactively make it the show that so many Star Wars fans wanted it to be.

What makes Episode 6’s Cad Bane and club bombing scenes stand out isn’t just that they’re well-constructed, but that they prove the series could have been the gangster thriller it was originally sold as. They give us a taste of what The Book of Boba Fett could have been: a darker and grimier Star Wars adventure, one less interested in Mandalorians and the Jedi and more in exploring the politics and power structures of Tatooine’s criminal underworld.

Instead, what we got is a show that feels disappointingly familiar and will likely be remembered more for how it set up The Mandalorian Season 3 than anything it did for Fennec Shand (Ming-Na Wen) or Boba Fett.

The Book of Boba Fett is streaming now on Disney+.