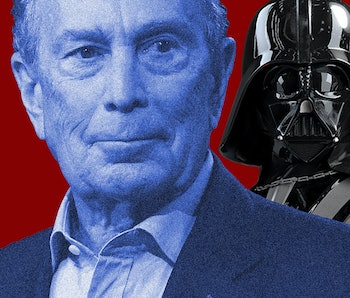 After an underwhelming showing on Super Tuesday, former New York mayor Michael Bloomberg opted to suspend his campaign for the presidency. Afterward, Bloomberg took aim at President Donald Trump via Twitter with a head-scratching Star Wars reference that cast Trump as the galaxy's most notorious evil enforcer, Darth Vader. Bloomberg also compared himself to Jedi Master Obi-Wan Kenobi via the gif of their famous duel in the Death Star from the 1977 film.

On the surface, Bloomberg wants us to interpret his dropping out of the 2020 race as a sacrifice for the greater good. By allowing himself to be struck down, like Obi-Wan, Bloomberg's allowing for the rise of a new hero to overcome the "evil empire" headed by Trump. Presumably, Bloomberg plans to throw his seemingly infinite personal fortune into supporting the newly resurgent Joe Biden, after the former Vice President's strong showing in Texas and southern primaries on Tuesday night.

For those of us who know far more about Star Wars than politics, the reference is a particularly loaded one. Did Bloomberg just tacitly admit that he lopped off three of Vader's limbs and left him to die in a lava pit during some climactic real-estate showdown in a swanky Manhattan eatery? Did Mike once love Donnie "like a brother," before the latter turned to the Dark side? Also, if Trump is Vader, who is Emperor Palpatine in this scenario? So many questions.

Given Bloomberg's open distaste for the policies of Bernie Sanders, it's likely he plans to "become more powerful" than Trump can "possibly imagine" by endorsing Joe Biden. In this analogy, Biden is Luke Skywalker, and also secretly Trump's son. And if Mark Hamill was a little short to be a stormtrooper, Joe Biden's about 50 years too old to be Luke.

A number of Star Wars fans will rightfully bristle at Bloomberg comparing his outrageous personal fortune to a philosophically rich concept like the Force. Then again, there's plenty of Star Wars cynics out there who may see comparing the Force to a big pile of money as a fitting analogy for the franchise since Disney acquired Lucasfilm. Regardless of who you plan to vote for, we can all probably agree on one thing: leave Star Wars out of this.

Thus far, the President hasn't responded to Bloomberg's attempt at a dank meme, but has continued to dunk on the Democrats' newest dropout in his own inimitable style, calling the former mayor's failed run at the highest office in the land "the worst, and most embarrassing, experience of his life."

Mayor Bloomberg has yet to confirm his cosplay plans for SDCC or NYCC.