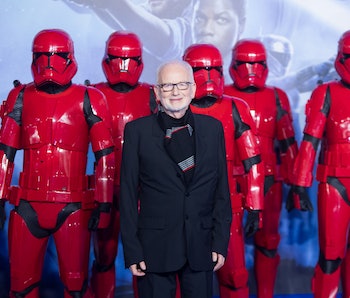 Palpatine the clone? Not so fast, young padawan. News broke over the weekend that a novelization of The Rise of Skywalker confirmed Emperor Sheev Palpatine was actually a clone in Episode IX, clearing up a major mystery from the actual movie. However, an even more recent quote from Palps himself (actor Ian McDiamird) reveals that the Emperor's return in Rise of Skywalker is more complicated than that.

Speaking at Comic Con Brussels 2020, McDiarmid revealed one key line of dialogue that was apparently cut from an early The Rise of Skywalker script but that might have cleared up a lot of the mystery surrounding Palpatine's return. You can watch the full 30-minute discussion or a key clip on Twitter, but here's the quote in question:

"Well, of course, there were all sorts of explanations for why I might return. I think I can reveal something. At one point, the script had the line in that first scene with Adam [driver] where he says 'You're a clone' and I said in that original script, which is no longer with us, 'More than a clone, less than a man,' which seemed to me to sum it up because we knew that the camera has already snaked past the clone tank in which there are various versions of Snoke that you probably noticed."

We're not exactly sure what McDiarmid is referring to regarding the Snoke clone tank, which actually made it into The Rise of Skywalker. Perhaps, unlike those Snokes, this Clone of Palpatine is significantly more powerful, though Snoke was also pretty tough before his apprentice stabbed him in the back. This could also mean that Palpatine isn't the same kind of clone we've seen in previous Star Wars movies but something more advanced and more powerful.

After all, the leaked novelization that confirmed Palpatine was a clone is told from Kylo's perspective, so it might not be totally accurate. Here's that passage:

“All the vials were empty of liquid save one, which was nearly depleted. Kylo peered closer. He’d seen this apparatus before, too, when he’d studied the Clone Wars as a boy. The liquid flowing into the living nightmare before him was fighting a losing battle to sustain the Emperor’s putrid flesh. ‘What could you give me?’ Kylo asked. Emperor Palpatine lived, after a fashion, and Kylo could feel it in his very bones that this clone body sheltered the Emperor’s actual spirit.”

Palpatine may look like a clone to Kylo, but it seems he's something else. Somewhere in between clone and regular human. What exactly that means, we may never know — especially since The Rise of Skywalker digital and home release won't include any deleted scenes.

Still, that line, "More than a clone, less than a man" feels important. Maybe one day we'll find out what it means. For now, we can't help but think it might have something to do with a famous line from Return of the Jedi.

As Obi-Wan once said of his old padawan, "He's more machine now than man."