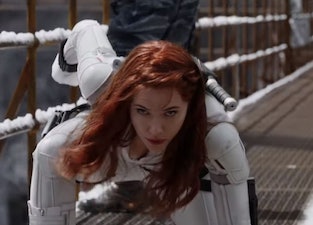 Black Widow’s introduction of Taskmaster will introduce one of the comics' deadliest threats to the Marvel Cinematic Universe. Trailers and TV spots have revealed the masked villain is a quick study with the ability to perfectly mimic the powers and fighting styles of other superheroes and villains. We already know he has claws akin to Black Panther, the archery skills of Hawkeye, and the shield technique of Captain America.

Now, a new Black Widow leak may reveal four surprising heroes whose skills Taskmaster will reference in the film. This movie could subtly bring Wolverine into the MCU, and that's just the beginning!

A sketchy new leak from 4chan (via Reddit user GypsyGold) unveils a number of Marvel heroes whose powers Taskmaster will showcase in Black Widow, including the skillsets of Iron Man, Captain America, and the Winter Soldier. The alleged leak lists these abilities as being actively used by the villain, whereas the powers of Thor, Ant-Man, Hulk, and Spider-Man are "passive." Either way, it's no surprise that Taskmaster studied the Avengers and mimicked their powers for use against them.

However, the leak also suggests a number of heroes who have not yet been introduced into the MCU will be reference by Taskmaster. What’s more, the breakdown for the powers and abilities he's absorbed from these characters is rather detailed and suggests that an effort was made so that fans would recognize their abilities immediately.

With that in mind, here are four new heroes that could potentially be coming to the MCU via Black Widow.

The leak suggests that Taskmaster will brandish his Pantera claws and references “needing to be nearly invincible in order to use them effectively.” Now, fans have long clamored for the nearly invincible Wolverine to show up in the MCU.

Disney’s acquisition of 20th Century Fox makes that possible, so Taskmaster’s use of the mutant’s powers may be the first sign that his appearance in the MCU will happen sooner rather than later.

Presumably, Taskmaster will wield the character’s iconic crescent-shaped darts and staff in Black Widow. We already know that Moon Knight is getting a solo series on Disney+, but considering how far off the release date is, it’s possible that the character may have a cameo in any one of the MCU’s films before heading to television.

What’s more, Moon Knight and Black Widow have battled each other in the comics — though Moon Knight was brainwashed at the time — and that fight might be adapted onscreen. At the very least, he could get a subtle nod.

Taskmaster supposedly makes a reference to a superpowered individual who never stops talking. That can only mean Deadpool, right?

The anti-hero has already headlined two movies of his own and appears to be the only character from Fox's defunct X-Men universe who will carry over to the MCU. Like Wolverine, it’s possible Deadpool will officially join the MCU at some point in the future, and Taskmaster’s reference opens the door to his arrival.

According to the leak, Taskmaster shows off some sweet motorcycle maneuvers before mentioning that he can't figure out how to ride up walls. That's a pretty clear nod to Ghostrider.

Technically, this character has already shown up in the MCU, having appeared on ABC’s Agents of S.H.I.E.L.D., but the series arguably had a very loose tie to the cinematic universe. And at one point, there were talks of a solo Ghost Rider series on Hulu before that was shut down when Kevin Feige took over creative control of Marvel’s TV branch.

In lieu of getting his own TV show, it’s possible the nod to Ghost Rider means that he will at least get a future cameo, officially bringing him into the MCU. Plus, Black Widow once fought alongside the character during their time together as members of the Champions, another superhero team. So a team-up seems possible.

Of course, it’s always best to take these leaks with a grain of salt. If true, however, then Taskmaster could be Marvel's clever way of Trojan Horsing a whole bunch of classic comic book characters into the MCU. Whether these references feel more like Easter eggs or canon remains to be seen, but either way, we can barely wait for Black Widow's release.