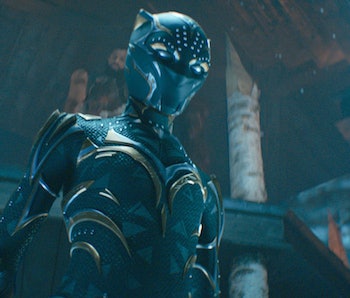 The legacy of Chadwick Boseman — and King T’Challa the Black Panther — looms large over Black Panther: Wakanda Forever. It becomes the connective tissue of the entire story, as Shuri tries to fill her elder brother’s shoes as both a mythical hero and a leader. By the end, it feels like she finally has closure, but a credits scene reveals a new wrinkle in T’Challa’s legacy.

Just how was that scene written? Producer Nate Moore has revealed why this creative choice was made, and how it was going to happen even before the tragic loss of Boseman. Major spoilers ahead.

Wakanda Forever’s mid-credits scene shows Shuri as she returns to Haiti to visit Nakia and perform the mourning ritual she started with her mother before they were interrupted by Namor rising from the water. Afterward, Nakia reveals a small boy she introduces as her son, Toussaint.

After swearing her to secrecy, Toussaint tells Shuri that his real name is Prince T’Challa, son of King T’Challa. Before his death, T’Challa assured Nakia that Toussaint would be safe and cared for, and he told them not to attend his funeral. It’s an emotional moment for all involved, including the audience.

In an interview with Collider, Wakanda Forever producer Nate Moore explained how the scene came to be. “That was always the end of the movie, pretty much since Chad's passing. The first draft we got had that in there,” he said.

But the concept of T’Challa having a son goes back further. “The notion of the character introduced in that scene actually predated Chad's passing,” Moore said. So while much of the plot was necessitated by Boseman’s death, the moment that ensures his legacy will remain in the Marvel Cinematic Universe for another generation was actually in the works for a while.

It’s easy to see why, as much of the MCU’s Phase 4 has been centered around characters passing the torch. There’s Sam Wilson taking on the Captain America mantle, Kate Bishop becoming Hawkeye’s protegé, Yelena Belova becoming a surlier Black Widow, and even Hulk randomly introducing his son at the end of She-Hulk: Attorney at Law.

Shuri may be the new Black Panther, but this scene introduced a T’Challa Jr. who was always in the game plan. Chadwick Boseman’s performance may be irreplaceable, but it will still ripple through the MCU indefinitely.