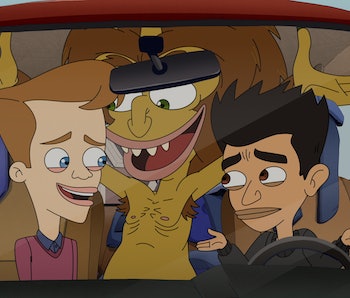 When Big Mouth first exploded onto Netflix in 2017, no one expected the crude-but-hilarious cartoon about puberty to become one of the streaming services defining shows. But four years and just as many seasons later, Maurice the puberty monster might as well be the company’s mascot. With Season 5 currently streaming, Big Mouth Season 6 seems all-but-confirmed, but what do we actually know about the next batch of episodes.

Here’s everything we have on Big Mouth Season 6, from the likely release date to when the first trailer will drop, along with the latest on the cast, plot, and those planned Netflix spinoffs.

Yes! Back in July 2019, Netflix renewed Big Mouth for Seasons 4, 5, and 6. Since then we haven’t heard much about the show’s future, which means the next season could be Big Mouth’s last. Still, at least there’s no reason to worry about whether the show is already over.

When will Big Mouth Season 6 be released?

Netflix pumps out its animated shows pretty consistently, and Big Mouth is no exception. Season 4 debuted on December 4, 2020, and Season 5 arrived 11 months later on November 5, 2021. Based on that schedule, the Big Mouth Season 6 release date could be as early as October 2022. Does that mean we’ll be getting another Halloween episode?

Is there a Big Mouth Season 6 trailer?

Not yet! Netflix typically releases new Big Mouth trailers about three weeks before each season airs. So expect a Season 6 trailer in late summer or early fall 2022.

Who is in the Big Mouth Season 6 cast?

Despite Nick Kroll voicing roughly half the characters, Big Mouth still has a stacked cast featuring some of the biggest names in comedy today. That includes...

Good question? Big Mouth Season 5 ended by wrapping up most of its big plotlines while also revealing that the hormone monsters and all the show’s other fantastical creatures were actually just a physical manifestation of the kids. Nick Kroll also showed up in live-action, which was pretty weird, to be honest.

With the fourth wall completely broken, Big Mouth Season 6 can go in pretty much any direction it wants, though we’re also expecting the show to offer some closure as the kids move on into young adulthood — assuming we don’t get a Season 7.

Will there be another Big Mouth Valentine’s Day special?

Big Mouth surprised fans in February 2019 with a plus-sized Valentine’s episode. Since then, we’ve held out hope for more one-off specials, but Netflix hasn’t delivered. So with Season 6 potentially being the end, will we get one more holiday special?

It’s possible we could get another Valentine’s episode, though that might seem repetitive. Meanwhile, Big Mouth Season 5 already covered Christmas, so don’t expect anything in late December. Of course, we could also get special episodes for anything from July 4 to Easter.

What about the Big Mouth spinoff, Human Resources?

Back in 2019, Netflix announced the first official Big Mouth spinoff, Human Resources, which is set in the office environment where the Hormone Monsters and their coworkers hang out. The show doesn’t have a release date, but production is currently underway.

Big Mouth producer Mark Levin also confirmed to Inverse that the team is working on even more shows for Netflix under a new production company called Brutus Pink. Read the full interview here.

More like this
Entertainment
Jan. 18, 2023
Everything you need to know about That ‘90s Show on Netflix
By Claire Fox
Entertainment
Jan. 25, 2023
Rick and Morty can survive without Justin Roiland
By Dais Johnston
Entertainment
Jan. 20, 2023
Legend of Vox Machina will continue — even if Dungeons and Dragons doesn't
By Eric Francisco
LEARN SOMETHING NEW EVERY DAY.
Related Tags
Share: