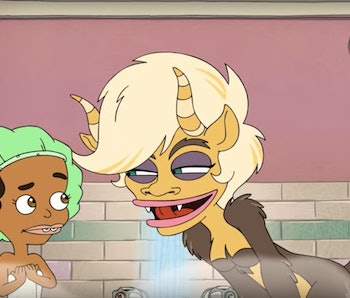 Amid all the coronavirus-related production shutdowns, TV writers and series showrunners have had to get a bit more creative for when things (hopefully) get back to some semblance of normalcy. So, while filming has come to a halt, remote video conferencing has kept creatives going behind-the-scenes and it seems the Big Mouth writers are no different. The series has historically debuted new seasons in the fall of each year, with Season 3 premiering on Netflix in October 2019. However, a big clue hints that Season 4’s release date could be coming earlier than expected.

Over the weekend, the voice cast — including Maya Rudolph, John Mulaney, and Mark Duplass — and writers of the acclaimed animated sitcom did a live table read of Season 3’s Episode 6, called “How to Have an Orgasm.” The live event was a way for the cast to stay connected, entertain fans, and help raise money for the organization Feeding America. Before the table read got started, however, Big Mouth co-creator Nick Kroll revealed that members of the writers’ room were still working remotely.

"Big Mouth writer’s room has been at full throttle. I’ve seen you over Zoom every day for the past two weeks,” Kroll said, after series writers Brandon Kyle Goodman and Emily Altman logged on for the live table read.

This is interesting for multiple reasons. First, the writers are likely working on Season 5 right now and not Season 4. This is evidenced by the fact that Jason Matzoukas, who voices Jay Bilzerian, revealed he had finished recording all of his Season 4 lines back in October. Matzoukas also mentioned that he couldn’t “remember what is 3 and what is 4,” so it’s possible that Season 4 is much farther along than widely assumed. That little nugget of information may mean the entirety of Season 4 has been written, with the writers likely breaking Season 5 storylines in the meantime.

Big Mouth wouldn't be the first show to debut early because of coronavirus delays. For example, AMC moved up the Season 3 premiere of Killing Eve by two weeks to cover The Walking Dead's time slot. It's possible Netflix would want to release the animation's fourth season early to keep new programming going. After all, the streamer's popular shows like Stranger Things and The Witcher are currently shut down and there's no telling when production will resume. That could mean release date delays and Big Mouth Season 4 could potentially fill the void.

While there’s no telling what post-production schedule looks like or where the animation studio is in putting the final touches on the next installment, Season 4 seems to be coming along nicely, with no indication that the coronavirus pandemic has shut down production on the season. With that in mind, it’s definitely possible that Season 4 could be coming a bit earlier than expected. In the meantime, all there is to do is wait.

Seasons 1-3 of Big Mouth are streaming now on Netflix.

More like this
Entertainment
Feb. 2, 2023
Everything Wrong with Netflix’s New Password-Sharing Rules
By Dais Johnston
Entertainment
Jan. 27, 2023
The Last of Us Season 2 renewal: Everything we know so far
By Eric Francisco
Entertainment
Feb. 3, 2023
Marvel just revived its primate assassin — What to know about Hit-Monkey
By Mónica Marie Zorrilla
LEARN SOMETHING NEW EVERY DAY.
Related Tags
Share: