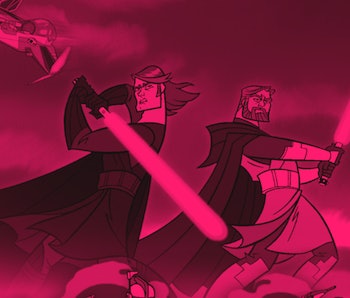 Back in 2003, being a hardcore fan of new Star Wars was not exactly cool. These days, we enjoy an interesting renaissance of love for the prequel-era, complete with the impending return of both Ewan McGregor and Hayden Christensen to the roles they defined. But could you walk into a comic book shop in 2003 and say you really liked the prequel era? Not without some odd looks, you couldn’t.

But even then, most every Star Wars fan could agree on one thing: Clone Wars was tight.

No, not the 2008 animated series which just aired its finale in 2020. We’re talking about Clone Wars, a brief animated series developed by the legendary Genndy Tartakovsky. During a time when the prequel era had trouble with its “cool” cred, the first Clone Wars series — the one before the much more widely known version — was extremely cool. And that extremely cool show is on its way to Disney+ next month.

Launched in 2003, and initially airing in 3-minute segments on the Cartoon Network (and subsequently on StarWars.com), Samurai Jack creator Tartakovsky’s Clone Wars was a bite-sized study in minimalist storytelling.

Want to watch Mace Windu totally own a bunch of Super Battle Droids? The episode titled just “Chapter 12,” features Windu doing exactly that, almost wordlessly, being cool as hell on the planet of Dantooine.

Are you a Kit Fitso stan? In “Chapter 5,” Kit Fitso wages underwater warfare on a scale that is shocking, and certainly feels much longer than it three-minute runtime.

Clone Wars is much more than tiny stand-alone stories that highlight different facets of the battles between the Separatists and the Republic. The series is also the first introduction of General Grievous and Asajj Ventress. In fact, in the 2004 finale of Season 2, “Chapter 20,” Grievous is a hundred times scarier than he is when he finally appears in Revenge of the Sith. In 2004, the sinister and relentless feeling of Grievous made it clear that Episode III would be dark as hell.

In Tartakovsky’s Clone Wars, the minimalism of the stories and animation style allows the menace of Count Dooku’s schemes to come across as creepier than anything in the actual films. It’s as though the Cartoon Network’s kid-friendly animation aesthetic communicates a sense of safety, and then, everything that Ventress, Grievous, and Dooku do contradicts that protective layer.

In many ways, this Clone Wars is an adult version of Star Wars crashing a kids’ show — which means that it’s interestingly more transgressive than its successor, the more robust and firmly “canonized” The Clone Wars.

Almost all of the events of Clone Wars were eventually painted-over by the latter series, even the moment when Grevious heads to Courscant just before Revenge of the Sith. But at the time these episodes aired, the internet was much slower, and the amount of Star Wars material slightly less ubiquitous. If you caught Clone Wars from 2003-2005, you felt like you were getting advanced spoilers on Episode III, which, at that time, was billed as the actual “end” of all Star Wars movies, ever.

Seen through that historical lens, Clone Wars was the bridge between Attack of the Clones, and what was then considered the “end” of the franchise. And even if it hold up canonically, in many ways it far exceeds its successors aesthetically and tonally.

Yes, Clone Wars lacks Ahsoka Tano — the single best idea to come out of the 2008 show — but the restraint it shows with other Star Wars-y details is impressive. Supposedly, the famous painter Rembrandt only painted what he actually needed on the canvas, and used certain brushstrokes to suggest light and color, without actually wasting paint. In the vast pantheon of Star Wars stuff, Clone Wars stands alone in this way, only showing what it needs to make a point: a small-ish Star Wars package that contains multitudes.

Clone Wars may not be the most satisfying Star Wars TV show ever made. But make no mistake: it was a more elegant show, for a more analog age. If you haven’t seen it yet, clear your calendar and get ready. The best Star Wars series is on its way, and you won’t want to miss it.