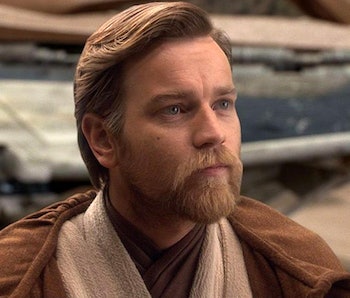 Since 2016, Star Wars fans have been enthralled with the possibility Ewan McGregor playing Obi-Wan Kenobi again. Yes, we heard him speaking to Rey through in The Force Awakens and The Rise of Skywalker, but we haven't seen McGregor as Obi-Wan since 2005. (Even Ray Park has returned as Darth Maul since then!)

Lucasfilm president Kathleen Kennedy has finally elaborated on another aspect of the show. We know it will have a definitive beginning, middle, and end. Unlike The Mandalorian, the Obi-Wan series won't be open-ended, but a "limited series." So, what does that mean for the timeline of the show? Let's dig into the sands of Tatooine and speculate.

3. The show might not make it to A New Hope

Back in 2019, Lucasfilm confirmed a specific time period in which the Obi-Wan show it took place: Eight years after Revenge of the Sith. This puts at least part of the show in 11 BBY or 10 BBY. Because there won't be a second season, if the entire show stays with this time period, we won't see Obi-Wan was doing right before A New Hope.

This means that if Luke Skywalker appears in the series, he'll be about 8 or 9 years old; the same age Anakin was when he met Obi-Wan in The Phantom Menace. Either way, assuming no time jumps, the Obi-Wan series won't be like Rogue One, with an ending right before the start of A New Hope.

Since the Obi-Wan series has a definite endpoint, the episodes might not be directly connected to each other. In other words, unlike the previous assumption, let's say there are time jumps in the series and that it simply begins eight years after Revenge of the Sith. This approach would make the Obi-Wan show more like an anthology.

Each of the episodes could tell one story of something that happened to Obi-Wan over the course of the full 19 years he lived in (relative) isolation on Tatooine. If this was the case, then the show might not even have an "arc," since we totally know how it's going to end. This makes sense because we already know exactly how his show will end.

The third option requires a different interpretation of the setting of "eight years after Revenge of the Sith." What if this means that the entire series doesn't begin at this point, but instead is set throughout those eight years?

At one point, McGregor indicated the show will only be six episodes. So, let's pretend each episode will cover roughly one year. This means the show could start in 17 BBY, cover six years, and end in 11 BBY — exactly eight years after Revenge of the Sith.

McGregor is 15 real-life years older now than he was when he played Obi-Wan in Revenge of the Sith. He's 49 years old now, and closer to Alec Guinness' age of 62 when he filmed A New Hope in 1976.

In The Phantom Menace, set in 32 BBY, Obi-Wan is about 25 years old. He's about 38 by the end of Revenge of the Sith. And, by the time of A New Hope, this makes Obi-Wan 57, which actually is pretty close to how old Alec Guinness really was. (When you think about it like this, it's a little messed up that Han refers to Obi-Wan as an "old fossil" in A New Hope.) But, at the same time, it does mean that the prequel timeline works pretty well with A New Hope. And, on top of that, it means that at roughly 50, McGregor is the perfect age to play Obi-Wan during a decade that ends when Luke Skywalker is still a little kid.

Ending the Obi-Wan series around 11 or 10 BBY also prevents the series from messing with any established canon. In the series Rebels, Obi-Wan eventually killed Maul on Tatooine in 2 BBY. If the new show ends in 8 BBY, there's little chance any of the Rebels stuff will impact the new show. In 10 BBY, the Rebel Alliance has barely gotten started.

If the Obi-Wan show ends before the Rebellion exists, this also means something else very important about this limited series. It could be the first Star Wars thing that features zero space travel. If Obi-Wan is on Tatooine, watching over baby Luke, and the Rebellion doesn't really exist, that means he has no reason to leave.

The Obi-Wan Kenobi series does not yet have a release date.