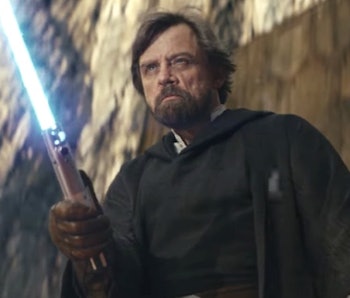 Ahsoka Tano is getting her own series on Disney+. The character made her live-action debut in Season 2 of The Mandalorian and was a big help to Din Djarin and Grogu, whose real name she revealed to an unknowing Mando. Details about the plot for Ahsoka are scarce (and will be for a while), but it’s possible that the upcoming series from Dave Filoni could explain why Luke Skywalker fully abandoned the Jedi in Star Wars: The Last Jedi. Yes, there might be more to it than what happened with Kylo Ren.

The theory — Reddit user descartes_blanche thinks Luke will cross paths with Ahsoka in the upcoming Disney+ series and she will warn him against carrying on the Jedi legacy. (Remember, Ahsoka abandoned the Jedi way in The Clone Wars.) The two could clash over their disparate ideologies, but Luke will obviously go on to build the Jedi Temple anyway. Hindsight is 20/20, however, and Luke’s regret over not heeding Ahsoka’s advice following the burning of the Jedi Temple and Ben Solo’s turn to the Dark side could be what causes him to close himself off from the Force completely — which is how we meet him in The Last Jedi.

Why Luke will return in Ahsoka

Now that Luke has appeared in The Mandalorian, it’s possible for him to show up in Ahsoka’s show too. And considering that the two have wildly different takes on the Jedi, this could make for an interesting and unique dynamic. After all, Ahsoka’s own disillusionment with the Jedi was the subject of much exploration in The Clone Wars.

It was brought up again when Din Djarin asked her to train Grogu in The Mandalorian and she refused. Having it out with Luke could expand on the arguments for and against the Jedi. It might also estrange the pair, especially since Luke may still be riding high on the feeling of redeeming Darth Vader, succeeding where Ahsoka arguably failed.

Luke was a hopeful Jedi in the original Star Wars trilogy. He was ready and willing to learn everything he could about the Force users after training with Jedi Master Yoda. In the years after Return of the Jedi, Luke planned on restoring the Jedis’ teachings and built an academy where he could train students to use the Force. Presumably, that is where he will take Grogu after The Mandalorian’s Season 2 finale.

Mark Hamill on The Last Jedi

We know that Luke’s withdrawal from the Jedi had to do (at least in part) with his failure to train Ben Solo. His nephew’s subsequent destruction of the Jedi Temple only exacerbated his disenchantment with the ways of the Jedi, leading to a complete detachment by the time of the new sequel trilogy.

But even Mark Hamill has stated that he disagreed with how his character was handled in the movie. When Last Jedi premiered, Hamill recalled a conversation with the film's director, Rian Johnson:

"I said to Rian, 'Jedis don't give up.' I mean, even if [Luke] had a problem, he would maybe take a year to try and regroup, but if he made a mistake, he would try to right that wrong, so right there, we had a fundamental difference. But it's not my story anymore, it's somebody else's story and Rian needed me to be a certain way to make the ending effective. That's the crux of my problem. Luke would never say that. I'm sorry."

Hamill raises a fair point. If you think about the character we knew in the original trilogy, his portrayal in the sequels doesn't totally make sense — even if it works within The Last Jedi's narrative. However, much like The Clone Wars used Ahsoka to massage some of the rougher details of the prequels into a cleaner story, Ahsoka showrunner Dave Filoni could use her again to make some minor repairs on the sequels too. Starting with Luke Skywalker.