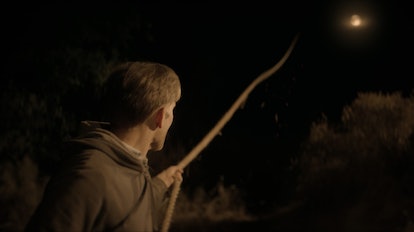 Cult movies are always fascinating. While UFOs and second comings may seem far-fetched, what if those beliefs were real? That's what this thriller attempts to answer.

What do you need to make a movie? A budget, yes, a cast, of course, but the most important aspect in a production is an idea. A movie could have a Titanic-level budget, but if its premise is shallow and boring, the movie will be too. The proof of this concept is this 2017 indie movie. It tells a slow-paced but engaging science fiction story with nothing more than a micro-budget and two multi-hyphenate creators/stars. It's an impressive and engaging watch — and the perfect Netflix movie night for fans of cult documentaries.

The Endless is the work of two extremely talented creators. Justin Benson directed, produced, wrote, edited, and starred in the film; and Aaron Moorehead directed, produced, edited, starred, and served as the cinematographer. (If those names sound familiar, it's because they've signed on to direct episodes of Marvel's upcoming Moon Knight series.) At that point, half the crew has basically been accounted for, so what little budget this film has goes a long way.

The movie opens with two epigraphs: "The oldest and strongest emotion of mankind is fear, and the oldest and strongest kind of fear is fear of the unknown," a quote from H.P. Lovecraft, and "Friends tell each other how they feel with relative frequency. Siblings wait for a more convenient time, like their deathbeds," credited to "Unknown." Together, these two quotes make up the thesis statement of the film, addressing both the very human emotion of fear and fascination at what we don't know, and the inherent bond and distance siblings share.

The plot follows two brothers, Justin and Aaron, a decade after they've left "Camp Arcadia," a so-called UFO death cult. The boys struggle to piece a life together, resorting to cleaning houses in between deprogramming sessions to help them transition back to everyday life. Everything changes when Aaron, the younger of the boys, gets a tape in the mail. The tape shows a Camp Arcadia member wax poetically about "ascension."

Aaron convinces Justin to visit the camp again just for a day. They arrive to find things similar to how they left them. In fact, nobody seems to have aged a day. They bond with old friends and Aaron marvels about how every single member has a job on the commune, be it drawing or making clothes or even close-up magic, which apparently is essential to the community.

As the cult's strange beliefs are revealed, they share some shocking similarities to Heaven's Gate, the infamous UFO death cult that culminated in a 37-person mass suicide. Their most extreme belief, castration, is something the group was exploring in its later years. One might think Camp Arcadia is meant to be a Heaven's Gate stand-in, but a character references the real-life group. This is a cult that recognizes cults exist, and a cult movie that knows what cult movies are supposed to be.

That's when the sci-fi kicks in. Strange occurrences at the camp reveal to Justin and Aaron that there is some truth to the Camp's beliefs, just not the way they think. A strange, unknown entity is observing and controlling the group through tapes, photographs, and "bubbles" of time loops found all over the forest. The action ramps up slowly, but like a frog in hot water, you'll soon find yourself in a boiling mass of distrust and malevolent higher powers.

The Endless is now streaming on Netflix in the US.

More like this
Science
5.6.2022 11:30 AM
The best sci-fi thriller on Netflix reveals a provocative spin on time travel
By Tara Yarlagadda
Entertainment
5.15.2022 11:30 AM
You need to watch the most underrated superhero franchise before it leaves Netflix this month
By Dais Johnston
Culture
5.4.2022 9:30 AM
7 thrilling sci-fi shows and movies new on HBO Max in May 2022
By Bryan Lawver
Related Tags
Share: