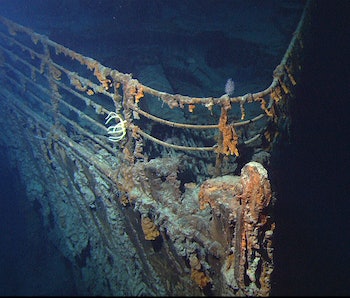 NOAA/Institute for Exploration/University of Rhode Island
Helen Farr and Fraser Sturt
6.15.2020 12:00 AM

The RMS Titanic’s Marconi radio was last used to make distress calls from the north Atlantic after the ship struck an iceberg on April 14, 1912. Now the radio could become the target of a salvage operation after a private company was granted permission to recover the artifact from the wreck’s interior.

This recovery for profit is directly at odds with the ethics of modern archaeological practice. It also raises questions about legal protection for shipwrecks such as the Titanic and how we choose to value our shared cultural heritage.

A federal judge for the Virginia Eastern district in the US has ruled that RMS Titanic Inc., which owns salvage rights to the shipwreck, can retrieve the radio. This is despite the fact the operation may involve damage to the hull, much of which remains intact 12,500 feet (3,800 meters) underwater. This case reverses a previous ruling from 28 July 2000 that prevents damage to the ship in line with existing agreements.

This won’t be the first time items are salvaged from the shipwreck. Since the Titanic was located in 1985, there has been a battle to safeguard it. Even with international recognition of its historical and cultural importance, including through legislation, by 1987 over a thousand artifacts had been salvaged.

After multiple court cases, a ruling allowed artifacts to be publicly exhibited. The court refused a subsequent request to sell the artifacts in 2001 and further planned auctions were subsequently postponed.

But the recent ruling, allowing invasive salvage of the radio, differs from previous ones in that it is now more than 100 years since the ship sank. As of April 15, 2012, the RMS Titanic falls under the 2001 UNESCO Convention on the Protection of the Underwater Cultural Heritage.

This provides some protection to the Titanic by forbidding the commercial exploitation of heritage. The US and UK are not signatories to the convention but broadly honor its principles via legislation.

The US 2017 Consolidated Appropriations Act specifically forbids “any research, exploration, salvage, or other activity that would physically alter or disturb the wreck or wreck site of the RMS Titanic unless authorized”.

The act adds that any such work should be in line with the Multilateral Agreement Concerning RMS Titanic. This agreement (which came into force in November 2019) between the US, UK, Canada, and France recognizes the wreck for its international significance and as a memorial to the 1,514 people who lost their lives.

The agreement explicitly states that any recovered materials should be kept together as a collection to enable study. Materials should be left on the seabed unless there are compelling educational, scientific, or cultural interests that require intervention.

In the recent court hearing, the US government agency the National Oceanic and Atmospheric Administration (NOAA, advised that the proposed salvage of the radio did not clearly meet these criteria.

The justification for the removal of the radio was made on the basis of its unique status, interest to the public, and the threat that it will be lost to degradation in the coming years. Each of these are valid points. The radio has a unique story, is highly evocative, and will (like the majority of materials) eventually degrade.

But the estimated rate of this degradation is controversial. The ship lies at such depth that conditions are fairly stable, and it seems that much of the damage to the ship since its discovery is due to salvage activity.

The RMS Titanic may not be the oldest shipwreck in the world, but it is arguably one of the most famous. The site is internationally recognized as a memorial to those who lost their lives.

From an archaeological perspective, recovering the radio will involve further damage to the memorial site for very limited gain with regard to scientific and cultural knowledge. We already know the make, model, and history of this radio. So the motivation for the salvage appears to lie in the radio’s economic potential as a tourist attraction and through a possible future sale.

As archaeologists, we understand there are times when intrusive and destructive interventions are required. But such acts need to be carefully considered in light of their impact on our shared global heritage. Once such actions take place they cannot be undone.

A court ruling for such a culturally significant site that goes against advice from NOAA and counter to the principles of UNESCO, risks suggesting that the principles of shared heritage and selective intervention can be easily negated through simplistic arguments of degradation and profit.

Once artifacts are removed from shipwrecks, they lose their context and potentially their wider scientific and cultural value. Commercial exploitation gives them a different, financial value that could encourage looting and site destruction. If it is acceptable to salvage material from what is arguably the wold’s most famous shipwreck, how can we protect lesser-known sites that are even more scientifically or culturally important?

As maritime archaeologists, we strive to protect underwater cultural heritage in the face of the ongoing destruction of underwater sites that would not be tolerated on dry land, where cultural heritage is more visible to the authorities and public. So, while this salvage operation may be legal, we strongly query whether it is ethical.

This article was originally published on The Conversation by Helen Farr and Fraser Sturt at the University of Southampton. Read the original article here.