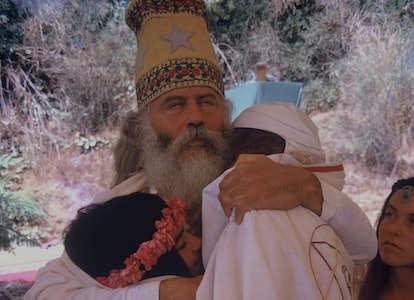 Hollywood is a breeding ground for cults. The same environment that attracts starry-eyed young actors looking to chase their dreams also attracts cult leaders who see a captive audience of lost souls looking for meaning. An underappreciated 2012 documentary streaming on Amazon Prime, Tubi, Vudu, and Pluto TV explores one of these cults. It's not quite as infamous as Hollywood groups like Heaven's Gate and the Manson family, but somehow more thoroughly of its time than either.

The Source Family came out decades after the death of the Family's patriarch, Jim Baker aka "Father Yod," but his presence looms large from the very first second of the film. Through the loving words of his followers and those who knew him, his personality becomes so vibrantly clear, it feels like you've known him for years.

Unlike other Hollywood cults, the Source Family didn't hide from the public eye. In fact, Jim Baker did everything he could to spread his word to as many people as possible. It all began with a restaurant. The Source Restaurant opened in 1969 on the Sunset Strip and served hip vegetarian fare to all sorts, from yogis to John Lennon to Marlon Brando.

People came and left, including the niece of the mayor of New York and Bud Cort, the star of Harold and Maude. The Source Family became a Los Angeles institution — a hobby for some, but a lifestyle for others. The restaurant became will known and was even featured in Annie Hall.

But then things became less Summer of Love. Many women in the commune were underage, and free love ran rampant throughout the group. Due to Father Yod's position of power, he took 13 "wives" in a mass marriage ceremony, some of whom were underage. He would force his followers into intense workouts, an extreme raw food diet only allowing for food eaten within 15 minutes of cutting, and long, arduous meditation sessions.

This documentary spans all sorts of facets of The Source Family — Father Yod's shadowy origins, ceremonial magic, even a short-lived musical career that's noteworthy for its own reasons. The Source Family feels more like a historical document than a cult documentary, a microcosm of what the New Age movement was and what it evolved into.

What makes this documentary different than others is the fact everyone interviewed often still believes in everything they were taught. Because Father Yod died in 1975 after deciding to try hang gliding with no experience, he never had the classic demise so many other cult leaders have. The cult dissolved naturally, lost without the charismatic glue that was Jim Baker.

The Source Family is evidence to prove how essential a cult leader is for a high-control group. While Jim Baker's death is tragic, it's comforting to see a cult disperse peacefully, without any sort of criminal goings-on as found in other Hollywood cults. It's also interesting to see those former members carry on the same beliefs in a more safe method — clean living, eco-friendly housing, and vegetarianism.

The Source Family is available on Amazon Prime, and streaming free on Tubi, Vudu, and Pluto TV in the U.S.

More like this
Culture
6.21.2022 7:55 PM
You need to watch the most nostalgic time-travel movie on Netflix before it leaves next week
By Jake Kleinman
Entertainment
6.19.2022 11:30 AM
You need to watch the best monster thriller of the '90s before it leaves HBO Max next week
By Mónica Marie Zorrilla
Entertainment
6.23.2022 11:30 AM
15 years ago, Bruce Willis made his most preposterous action thriller ever
By Vance Osteen
Related Tags
Share: