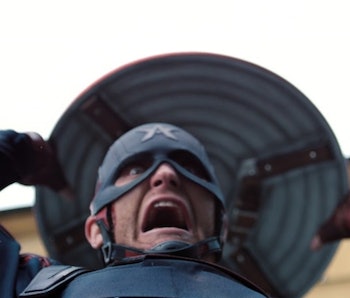 At least one person died at the end of The Falcon and the Winter Soldier Episode 4, but it might not be the one you’re thinking of.

To go any deeper, we’re gonna have to head into spoiler territory. So consider yourself warned: If you haven’t watched Falcon and the Winter Soldier Episode 4 yet turn back now. This article will be here waiting for you when you return.

Still here? Great. So, as you might have guessed, we’re talking about Lemar Hoskins (aka, Battlestar). Near the end of Episode 4, we get a full-on showdown between Falcon, the Winter Soldier, John Walker/Captain America, Battlestar, and the Flag-Smashers. But unlike last time, something has changed: Walker is now a Super Soldier.

After picking up the last remaining dose of the serum, he injects himself (but only after a coded conversation with Lemar) and attempts to kill Flag-Smashers leader Karli Morgenthau. In a sad twist of fate, the fight goes sideways when Battlestar gets tossed like a ragdoll against a stone column. He falls to the ground, his neck slumps to one side, and his eyes close.

The implication seems to be that Battlestar is dead — especially after John Walker runs over, checks his pulse, and makes an angry face. This is also clearly Walker’s motivation a moment later when he chases down a fleeing Flag-Smasher and seemingly kills him in broad daylight with Captain America’s shield while a crowd of tourists films the execution on their smartphones. (It’s not Walker’s best moment...)

But is Battlestar actually dead? There are multiple reasons to believe the character might still be alive.

Is Battlestar dead? Check the comics

The Marvel Cinematic Universe certainly isn’t beholden to the comics, but it never hurts to use them as a source of inspiration. So it’s worth noting that Lemar Hoskins also suffers a pretty bad injury during the Civil War storyline told across 2006 and 2007.

In that story, he refuses to give in to government oversight and sustains a back injury when he’s attacked by Iron Man and S.H.I.E.L.D. Battlestar is later rescued by Captain America’s allies and joins the final battle, despite his injuries.

So based on this arc alone, it’s certainly possible that we could see a seriously injured (but not dead) Battlestar return for Falcon and the Winter Soldier’s big finale.

Beyond the comics, it’s also worth noting that unless Marvel explicitly kills a character, there’s a very good chance they’ll come back. And even then, anything is possible. (See: Loki.) So until we actually get a scene at Lemar Hoskins’ funeral, we wouldn’t count him out just yet.

More like this
Entertainment
Jan. 25, 2023
The MCU could bring back a hero from its most underrated TV show
By Dais Johnston
Entertainment
Feb. 3, 2023
Marvel just revived its primate assassin — What to know about Hit-Monkey
By Mónica Marie Zorrilla
Entertainment
16 hours ago
Ant-Man's Memoir Is Real and Hints at Dark Quantumania Ending
By Eric Francisco
LEARN SOMETHING NEW EVERY DAY.
Related Tags
Share: