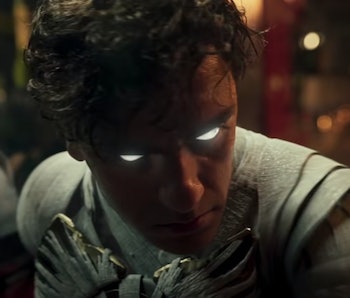 A caped crusader reaches into his utility belt for a grappling hook to leap across the rooftop. The Moon is full, but justice is running on empty.

Their cape is spread wide, and upon descent, they strike fear into the hearts of criminals — a most cowardly lot. Who is this strange creature? Why, he is none other than... Moon Knight?

With The Batman out in theaters and Moon Knight soon to drop on Disney+, it’s an interesting time to bring up an idea that’s pervaded in comics for some time: the uncanny similarities between Batman and Moon Knight. It’s also a good time to finally put this idea to rest.

Batman and Moon Knight are nothing alike. Aside from the vaguely similar silhouettes as caped superheroes, the two characters — one an icon from DC, another a cult favorite from Marvel — share little in common. It’s not just the finer details that separate them, like their origins and the differences in their alter egos. It’s that the two fundamentally represent opposing sides of superhero philosophies that would put them at odds if they were ever in the same room.

Here’s why Batman and Moon Knight comparisons are so common and why it’s time those comparisons should end.

While comparisons to Batman and Moon Knight have always been in the ether, like Coke and Pepsi, one can reasonably point to a single comic that started it all: Hulk! Magazine #13, published in 1979.

In the 1970s, after the cancellation of the campy Batman TV show, Neal Adams and writer Dennis O’Neil took it upon themselves to reinvent Batman into the gritty character we’re now familiar with. Adams worked in commercial advertising before pursuing his career in comic books, and his photorealistic style allowed his comics to pop in a way the medium hadn’t before. The realism gave previously unseen depth to characters like Batman.

With Adams’ Batman the hot thing in comics in the ‘70s, it’s unsurprising Sienkiewicz mimicked his style when tasked with drawing another brooding caped crusader, Marc Spector, aka Moon Knight. But Sienkiewicz did more than just imitate.

Specifically with Hulk! #13, Sienkiewicz illustrated Moon Knight as basically Batman with a swapped color palette. Sienkiewicz not only envisioned Batman under the same shades and shadows as Adams did, but he depicted Moon Knight’s array of gadgets — like his grappling hook and crescent-shaped boomerangs — all in plain sight, in a way that purposefully evoked Batman. While the similarities have always been present on the surface, Sienkiewicz’s illustrations of Moon Knight in Hulk! #13 cemented it for years to come.

Further comparisons run deeper than either characters’ wealthy alter egos, costumes, and tools. Both are fueled by vengeance, pursuing justice with maddening fury. But closer inspection illuminates how miles apart Batman and Moon Knight really are.

Batman is vengeful for the murders of his parents and does what he does because he wants to prevent what happened to him for others. His mission has no real end because Gotham City’s rot is so deep; there’s no undoing it. On some level — and made more explicit in Matt Reeves’ new film — Batman knows he may be the source of Gotham’s evil. But by doing nothing, he knows the city would be even more damned.

Moon Knight pursues vengeance because of the holy deity, Khonshu, the Egyptian god of revenge and supernatural benefactor to Moon Knight. Being a former soldier of fortune, his connection to Khonshu enables Moon Knight to violently pursue justice free from a guilty conscience.

While Moon Knight doesn’t necessarily derive sick pleasure from beating people up, he’s more forgiving of himself than Batman, who sees his brutality as a necessary evil. Moon Knight will murder and think little of it, while Batman is dogmatic in making sure his hands stay clean from blood. Truth be told, Batman and Moon Knight could never see eye-to-eye, as they both operate on wildly different ends of the spectrum.

Less critical but bears mentioning: Location. While Moon Knight operates in New York, his identity is not so intrinsically tied to it like Batman is to Gotham. In the Marvel Universe, New York is full of other heroes. You’ll find Daredevil in Hell’s Kitchen, Luke Cage in Harlem, the Fantastic Four on 42nd Street, and Spider-Man swinging between midtown and Queens. Moon Knight is just one of many heroes in a city that doesn’t need Moon Knight. But Moon Knight is still there because he wants to be.

If there’s one fundamental difference separating Batman and Moon Knight, it’s time. Batman’s long 80-year history has enabled multiple interpretations, affording Batman a rare status as a canvas for artists to reinterpret time and again to suit the changing times.

Moon Knight has been around for almost half as long as Batman — his first appearance in comics was in 1975, a whopping 48 years ago — but his cultural clout is comparatively minimal. Oscar Isaac will be the first actor to play Moon Knight in live-action for the upcoming Disney+ series. And because Disney-owned Marvel Studios has shown to keep a vice grip on its characters, it’s a safe bet the TV series will be the definitive on-screen version of Moon Knight for at least a generation.

This doesn’t make Batman better or worse than Moon Knight. It’s just circumstance. But it’s always worth looking past the capes, cowls, and costumes to see who these characters are underneath.

Moon Knight will begin streaming on Disney+ on March 30.