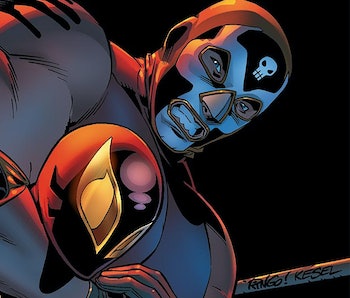 Sony will continue the ongoing expansion of its Spider-Man Cinematic Universe with El Muerto. The new superhero film will star Puerto Rican musician Benito Antonio Martínez Ocasio, a.k.a. Bad Bunny, as an obscure Spider-Man comic book character named Juan-Carlos Sanchez. It’s the latest addition to a growing lineup of Spider-Man-related projects that Sony has in development, which also includes Madame Web and Kraven the Hunter.

El Muerto was only just announced, which means very few details have been revealed. That said, here’s everything you should know about Sony’s newest live-action superhero title.

When is the El Muerto release date?

As of this writing, El Muerto is set to hit theaters on January 12, 2024. Assuming it sticks to that date, that means El Muerto will debut after Kraven the Hunter, Madame Web, and Spider-Man: Across the Spider-Verse, all of which are set to be released in 2023.

The film will, however, hit theaters before Spider-Man: Across the Spider-Verse Part II, which is set to be released on March 29, 2024.

Who is in the cast of El Muerto?

El Muerto will star Benito Antonio Martínez Ocasio, a multi-hyphenate performer better known by his stage name, Bad Bunny. Ocasio will appear in the film as its lead character, Juan-Carlos Sanchez, which will make him the first Latino actor ever to lead a live-action Marvel superhero movie.

As of now, Ocasio is the only actor attached to El Muerto, but with an early 2024 release date already set, fans should probably expect to see more performers sign on in the coming months.

Is there a trailer for El Muerto?

Sony has not yet released a trailer for El Muerto, as no director has been hired to helm the film and production hasn’t begun. Fans should expect to see the first teaser for the film after more progress has been made.

What is the plot of El Muerto?

Specific plot details for El Muerto haven’t yet been released by Sony. However, the film will focus on Juan-Carlos Sanchez a.k.a. El Muerto, an obscure Marvel Comics character who has a history with Spider-Man.

In the comics, Sanchez was a young boy trained by his father to be the latest member of his family to assume the masked wrestler mantle of El Muerto. Once he did, Sanchez would be granted a wrestler mask that imbues its wearer with superhuman strength and endurance.

However, his disinterest in fighting resulted in a rival named El Dorado tracking Sanchez down and attacking him, only to murder his father instead. Sanchez was then given 10 years to train for the moment when he would have to fight and unmask an anonymous superhero. Eventually, that prophecy led Sanchez to challenge Spider-Man to a fight, which he lost.

To make matters worse, while he was recovering from his defeat El Muerto was ambushed by El Dorado. His life was saved by Spider-Man, and the two men worked together to defeat El Dorado, with Spider-Man even forcing the villain to flee by destroying his golden armor. It’s possible that El Muerto will tell a similar story about a young man forced to assume his father’s wrestler mantle.

Will El Muerto take place in the MCU?

No, El Muerto will not be set in the Marvel Cinematic Universe. Instead, the film is expected to take place in the same Sony Spider-Man Cinematic Universe as films like Venom, Morbius, Madame Web, and Kraven the Hunter.

Of course, Morbius and Venom have both established that Sony’s Spider-Man Cinematic Universe does exist in the same multiverse as the MCU, so there’s always a chance that Ocasio’s Juan-Carlos Sanchez could one day cross paths on the big screen with Tom Holland’s Peter Parker. Only time will tell.