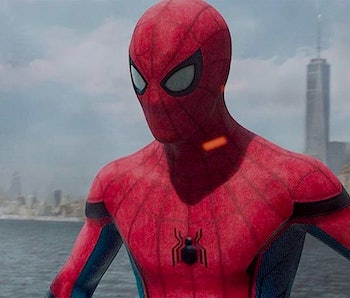 The mid-credits scene in Spider-Man: No Way Home features one of many surprising cameos made throughout the entire film. But unlike the other characters, this particular Marvel character is here to stay — sort of.

With so much unfolding in Phase 4 of the Marvel Cinematic Universe, it’s almost impossible to keep up with all of the new characters (Eternals) and worlds (the multiverse!). No Way Home’s mid-credits scene essentially adds to the pile.

Here is what the cameo means for the MCU and the larger-than-life ramifications it could have on Spider-Man’s future.

Major spoilers for Spider-Man: No Way Home ahead.

No Way Home’s mid-credits scene is best described as a sequel to the post-credits scene in Venom: Let There Be Carnage. In the Venom sequel, we see Eddie Brock/Venom (Tom Hardy) on vacation in Mexico when suddenly they are transported to another world. J. Jonah Jameson (J.K. Simmons) is now on the TV in their hotel room, revealing that Spider-Man’s identity is Peter Parker (Tom Holland) — a moment from Far From Home’s credits scene. (Can we call this the first credits-scene trilogy?)

In No Way Home’s mid-credits scene, we see Eddie Brock with his alien parasitic partner Venom having a drink at a bar in Mexico. He’s talking to his bartender (played by Ted Lasso’s Cristo Fernandez) about what’s happened with the Avengers, Thanos, and the Blip in this particular universe (that being the MCU). Brock and Venom are in disbelief, which insults the bartender who says he lost his entire family for five years in the Blip.

Before Brock and Venom can say more, they start to disappear, likely returning to their home universe thanks to Doctor Strange’s spell at the end of No Way Home. But they don’t entirely go back home — a small glob of the Venom symbiote is left behind on the bar counter.

What No Way Home’s credits scene means for the MCU

Venom leaving a piece of himself in the MCU that he will likely come to life in that world. While it might be too early to speculate, it’s fair to say the scene is proof of Marvel and Sony’s commitment to bringing Venom into the Marvel movies.

In addition, Spider-Man and Venom have a long comics history, meaning future movies have a lot of material to work with. Sam Raimi’s Spider-Man 3 was the first to show Venom on the big screen with Topher Grace playing Brock opposite Tobey Maguire’s Peter Parker, but the overstuffed movie failed to do the alien symbiote justice.

When Sony rebooted Venom with his own film in 2018, many fans began speculating when Tom Hardy’s Venom would face Holland’s Spider-Man. That now seems to be closer to becoming a reality, though it’s just as likely that bit of black parasitic goo will find someone else to inhabit

With Venom officially in the MCU, who knows what havoc he’ll bring and who the MCU’s version of Eddie Brock will be. All we do know is that what Venom does will surely catch Peter Parker’s attention. Hopefully, we’ll be seeing a new Spider-Man vs. Venom showdown sometime in the future.

Spider-Man: No Way Home is now playing in theaters.

More like this
Entertainment
7.28.2022 10:00 AM
Spider-Man 4? Tom Holland's MCU return could be sooner than you think
By Alex Welch
Entertainment
7 hours ago
Marvel is torturing VFX artists, but the solution is obvious
By Eric Francisco
Entertainment
8.8.2022 4:52 PM
Giancarlo Esposito’s X-Men quotes could reveal a new MCU trend
By Dais Johnston
Related Tags
Share: