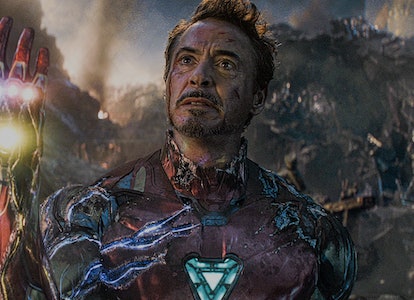 When Iron Man dealt the killing blow to Thanos and his alien army in Avengers: Endgame it just felt right from a narrative perspective. Tony Stark has always been the star of the Marvel Cinematic Universe. He's also been the guy with the most to prove ever since Captain America said, "You're not the guy to make the sacrifice play" back in 2012's The Avengers.

But despite all that, there may be another reason that Iron Man had to be the one to defeat Thanos in Endgame, and it has everything to do with one of the worst movies in MCU history: Iron Man 2.

The theory — In a recent TikTok, Marvel fan Joshua Murcray proposes an interesting idea. What if Tony Stark invented a synthetic Infinity Stone and used it to power his Arc Reactor (aka, the glowing thing that fits into his chest and powers his Iron Man suit)?

This isn't just a "what if?" scenario. As Murcray notes, the plot of Iron Man 2 hinges on Stark creating a new element invented by his father Howard Stark that can power the Arc Reactor without killing Tony. And what did Howard Stark spend most of his life studying? The Tesseract, which is basically just a cube designed to hold the Space Stone.

In other words, Iron Man used his father's research into Infinity Stones to create a seventh stone. This could explain how his tech evolved so rapidly throughout the subsequent movies. It helps explain why he was the only superhero to make Thanos bleed in Avengers: Infinity War, and it might just explain why Tony Stark had to be the one to stop Thanos in Endgame. (And yes, I'm aware the movie was later retconned to make Tony's "new element" vibranium, but this theory is way more fun.)

How it changes Avengers: Endgame

If we accept that Iron Man's suit is powered by a synthetic Infinity Stone, that means in Endgame when Tony grabs all the stones he's actually using seven. That's one more than anyone else in the entire MCU has ever used.

This could explain a few things. First, it may explain how Tony was able to wipe out Thanos and his entire army. Sure, we've seen the stones do something similar before, but Thanos is one of the most powerful beings in the Marvel universe, and an extra stone couldn't hurt. Second, it might reveal why Tony died right afterward since he was channeling the power of not just six stones but seven. And third, it might explain how a normal human was able to use the Infinity Stones in the first place since he'd spent years acclimating himself to one of them.

You might argue that none of these questions really needed answering in the first place. The rules of the Infinity Stones are vague enough that Tony Stark could theoretically wield them without anything special. But this new theory makes Iron Man's entire MCU saga, and his last moments in particular, even more powerful.

More like this
Culture
Sep. 25, 2022
8 stellar sci-fi movies leaving HBO Max in September 2022
By Robin Bea
Entertainment
Sep. 24, 2022
The MCU’s Ironheart will improve on the comics in one pivotal way
By Richard Newby
Culture
Sep. 13, 2022
Thunderbolts cast: How the MCU team is changing the comics
By Robin Bea
Related Tags
Share: