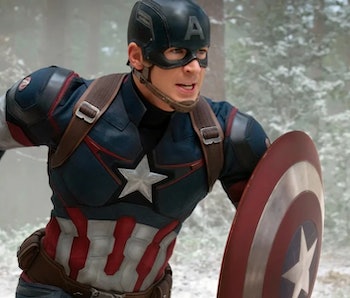 Captain America retired in Avengers: Endgame, officially passing on the mantle to Sam Wilson after returning to the past to live out his days with Peggy Carter. Endgame marked the end of Steve Rogers’ run in the Marvel Cinematic Universe. It was an apt ending for a character who’d sacrificed so much of himself for the greater good. With Chris Evans’ Marvel contract also fulfilled, fans aren’t expecting to see Cap in the next two phases of the MCU. However, there is one rather twisted way the character could return in Avengers 5.

Captain America: The Winter Soldier revealed that HYDRA, a fascist organization with Nazi ideologies, had infiltrated all levels of S.H.I.E.L.D. and had used the Winter Soldier program on Bucky and others to turn them into enhanced and brainwashed assassins. S.H.I.E.L.D. never fully recovered after that bombshell. Captain America ultimately battled and defeated HYDRA before they could obtain any more power, saving Bucky in the process. But, what if things had been different?

A new leak suggests that Captain America will return in Doctor Strange in the Multiverse of Madness, only this version of the character will be an agent of HYDRA from another reality. Endgame’s implementation of time travel paved the way for alternate timelines and realities, so it wouldn’t take much imagination to visualize an alternate and evil Cap, complete with HYDRA costume.

While in the elevator with a few HYDRA agents masquerading as S.H.I.E.L.D., Captain America whispered “Hail HYDRA” to signal that he was on their side. Their shocked faces were amusing and Cap got a kick out of it, too. Of course, the whole thing was a diversion tactic so that he could successfully leave the building with the tesseract. Should Cap return to the MCU as an evil doppelganger, one could argue that this Endgame moment was a clue all along, similar to how Steve wielding Thor’s hammer was hinted at in Avengers: Age of Ultron.

Superheroes being evil isn’t a new concept and has been explored in comic book properties like Watchmen and The Boys. In 2016’s Captain America: Steve Rogers No. 1, Steve said the same chilling words he did in Endgame. However, it was because he had been trained by HYDRA in this rewritten version of his life. In 2017’s Secret Empire storyline, the original Captain America had been replaced by a loyal HYDRA doppelganger, put in place to aid the fascist regime's rise to global power and domination.

It’s possible that evil Captain America could first appear in Doctor Strange in the Multiverse before returning in Avengers 5 to execute the Secret Empire storyline. If this Cap exists in another reality, then it’s likely that the Doctor Strange sequel alerted him and HYDRA to the presence of another Earth. Knowing how hellbent they are on expanding their ideology, it wouldn’t be a surprise if they hopped dimensions to do so.

It would be a clever way to bring back the first Avenger and the evil regime in one fell swoop. There’s no doubt that the Avengers fighting a wicked Cap could raise the emotional stakes for the team and the use of doppelgangers is always a fun way to explore what if scenarios. Evans may be done with the MCU, but playing a twisted version of his character may be too good to pass up.