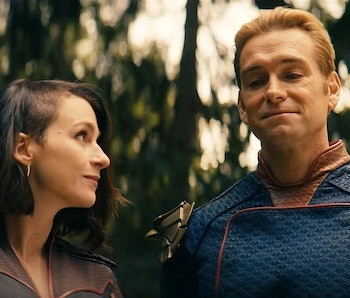 Stormfront’s arrival challenged The Seven in The Boys Season 2. The diabolical Supe joined the Vought-owned team in Season 1, and was initially pitted as Homelander’s rival. However, it wasn’t long before their relationship evolved into something more unsettling than a war of the ego. The Boys delved a bit into Stormfront’s past, but there may be more mysteries yet to solve about her relationship to Homelander. We can look to the character’s comic book history to find out whether or not she is actually Homelander’s mom.

Spoilers ahead for The Boys Season 2.

To the public, Stormfront was a cool, confident, modern-day savior with a robust social media following. However, she quickly proved what a violent racist she was, mercilessly killing people of color while hurling racial slurs early on in Season 2. The Boys later confirmed that Stormfront was the first successful Compound V recipient in the 1930s, taking on the identity of the Supe Liberty in the 1970s before disappearing in 1979.

Things took an even more disturbing turn after Stormfront revealed to Homelander that she and Vought planned to create an Aryan Supe army to destroy all other races. Homelander was being primed to lead the army and, happy with this plan, he and Stormfront drop their rivalry and have sex. Now, fans have speculated that Stormfront is actually Homelander’s mother, which is disturbing considering recent developments.

However, Stormfront was essentially used as the blueprint in Homelander’s creation. Following Stormfront’s brutal death at the hands of The Boys, Vought took Stormfront’s DNA and repurposed it to make an even stronger Supe. Thus, Homelander was born. While Homelander isn’t an exact clone of Stormfront, the fact that he has his DNA does make him a partial biological parent.

With this comics backstory in mind, The Boys could very well make Stormfront Homelander’s mother on the show. We know that Stormfront has a biological daughter named Chloe Vought (Stormfront was Frederick Vought’s wife). Considering the Supe’s white supremacist ideology and plans for an Aryan takeover, it’s possible that she willingly gave her DNA to create Homelander as the perfect Supe leader.

Perhaps he was raised in a lab to avoid personal attachment, which is diabolical enough for The Boys to pull off. Either way, Stormfront passing on her genetic material to Homelander would certainly mirror the Supe's comics story. It would also explain why Stormfront has been so focused on him since her introduction.

If Stormfront knew that Homelander was her son/partial clone, it turns their sexual relationship into an incestuous one and makes for a rather disgusting and twisted storyline. The Boys has never shied away from such things and emulated a similar relationship between Homelander and Madelyn Stillwell in Season 1. Whatever happens, such an entanglement will likely end in chaos for all involved.

More like this
Entertainment
6.24.2022 11:15 AM
Behind the scenes at “Herogasm,” The Boys’ most NSFW episode ever
By Aaron Pruner and Jake Kleinman
Entertainment
6.17.2022 12:30 PM
Ms. Marvel Episode 2 reveals a tragic backstory — the comics go even deeper
By Mónica Marie Zorrilla
Entertainment
6.29.2022 6:18 PM
Ms. Marvel's many love interests reveal an important MCU first
By Dais Johnston
Related Tags
Share: