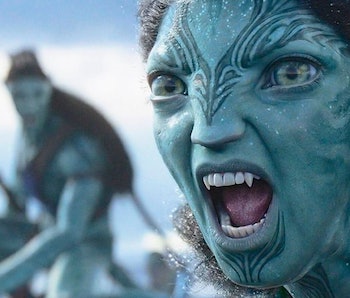 Near the end of the 2000s, two important films changed Hollywood forever. The first was Iron Man, which debuted in 2008 and ushered in a new era of the interconnected cinematic universe and total superhero saturation. The second, a year later, was James Cameron’s Avatar, which pushed the limits of movie-making technology and then faded into relative obscurity.

Thirteen years later, superheroes seem to be the only sure thing at the box office. Leave it to James Cameron to return with an Avatar sequel that just might have what it takes to dethrone Marvel Studios. (Although let’s be honest, when Disney competes with Disney, no one really wins.)

But even before the final numbers come in, Avatar: The Way of Water has already proved that some of the biggest complaints people have about Marvel movies are totally correct. Here’s how.

James Cameron vs. the post-credits scenes

The fact that the new Avatar movie also goes out of its way to set up a third movie (official title: Avatar: The Seed Bearer) means there’s plenty of ammo for a post-credits reveal. It’s easy to imagine the execs at Disney pressuring him to do it. And yet, James Cameron refrains.

I don’t want to give the guy too much credit, but this is still worth celebrating. Not every movie needs to end with a scene from the next sequel after all. Sometimes, the ending itself is more than enough.

Don’t get me wrong, Marvel movies have plenty of heart — there’s a reason “I love you 3000” became an instant sensation. But the writers at Marvel Studios also just can’t help themselves from turning everything into a joke. Ever since Joss Whedon penned the script for 2012’s The Avengers, the default vibe for the MCU has been quips — and lots of them.

Since then, Marvel’s quippy tone has spread to other franchises like Star Wars (“They fly now!”) and DC (particularly in James Gunn’s The Suicide Squad). So it’s surprising (and impressive) that Avatar: The Way of Water is a very serious movie. Aside from a bit of comic relief delivered by the youngest Sully child, I’d be hard-pressed to name a single joke in the three-hour film.

To be clear, that’s a good thing. In an era where every big blockbuster movie needs to be an action blockbuster, a drama, and a comedy all at once, Avatar: The Way of Water is brave enough to take itself seriously. That’s something we should celebrate — even if it’s just another CGI-fest from Disney.

Avatar: The Way of Water is in theaters now.