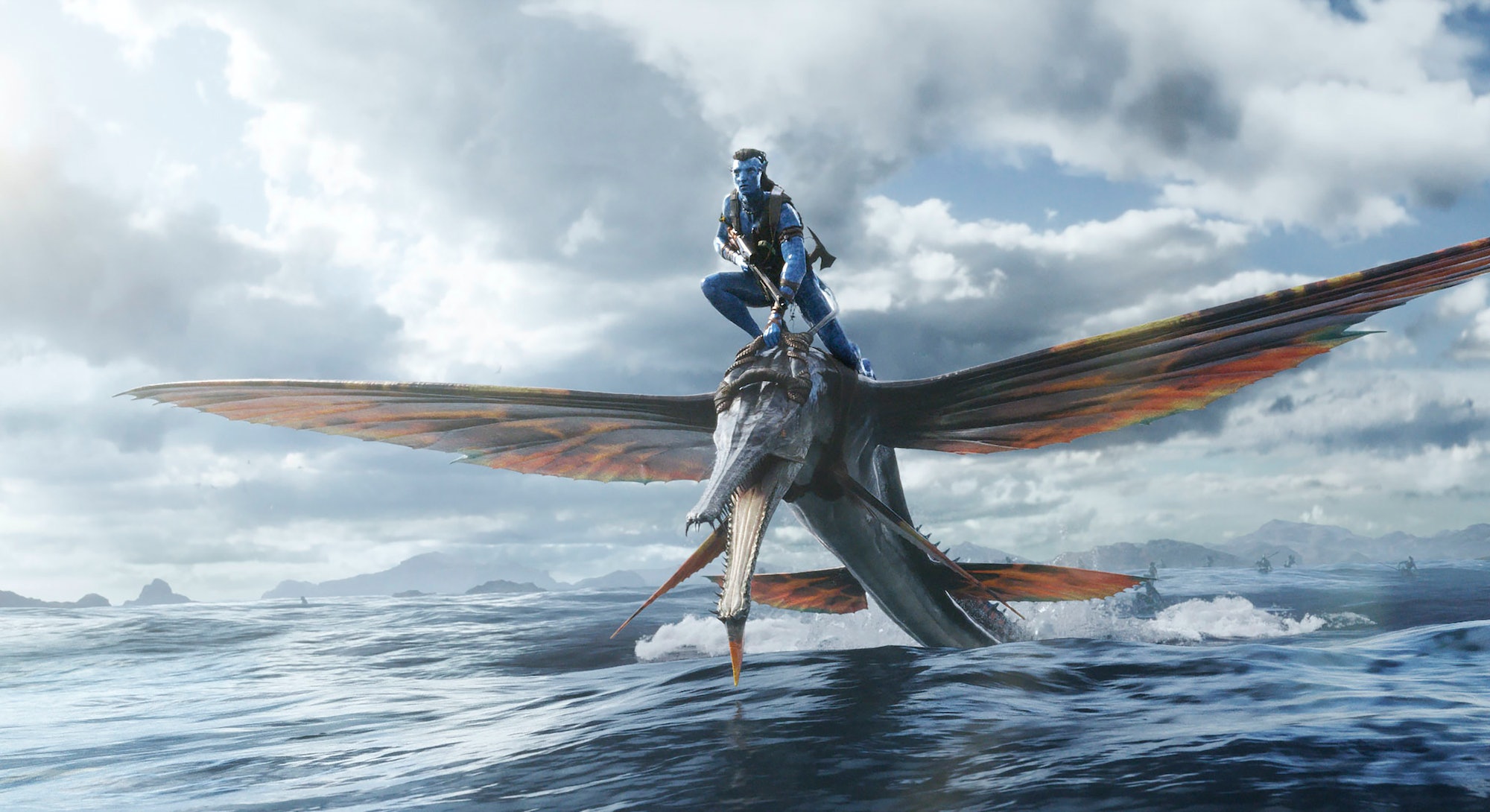 The eminent blockbuster auteur of Hollywood has harnessed his talents to rejuvenate the endangered cinema experience with one of the best movies he’s ever made.

The sequel to Cameron’s 2009 box office hit, Avatar: The Way of Water is simply bigger and better than its predecessor in every regard. It demands the biggest screen you can find so that its most potent elements — from its impossible scale and skillful spectacle, to its more complete range of emotions and thematic romanticism — can be completely absorbed. Plotting hiccups and Cameron’s own inability to resist teasing Avatar 3 aside, The Way of Water is impeccable escapism. Every nut, bolt, and pixel in this cutting-edge theme park is calibrated to the nth degree. But all this sophistication only makes it that much easier to be swept away by this maximalist sci-fi epic whose transcendence is achieved through the might of its finely-tuned parts.

After a rushed prologue that feels like Cameron hitting fast forward through another sequel he didn’t make, The Way of Water drops audiences back into Pandora, the lush alien Eden that mankind wants to squeeze for all its worth. Ex-Marine Jake Sully (Sam Worthington) has made his home as a true Na’vi with wife Neytiri (Zoe Saldaña).

They have a family now: two stubborn sons, one rambunctious daughter, and a Tarzan-esque hanger-on named Spider (Jake Champion). They’ve also adopted introverted Kiri, played by Sigourney Weaver, who commits to the role of a socially awkward Na’vi teenager. When the enterprise-driven villains return, including jarhead Colonel Quaritch (Stephen Lang) now cloned into an Avatar of his own, Jake and his family flee to a new corner of Pandora inhabited by a sea-centric, Polynesian-coded race of Na’vi whose culture is intrinsically tied to the water and the stunning creatures living in it.

Despite the sci-fi nonsense scattered throughout the film — including the overcomplicated way Lang’s “dead” Quaritch is resurrected — The Way of Water never gets too bogged by Cameron expanding his cinematic ant farm. Under the filmmaker’s penmanship, with screenwriters Rick Jaffa and Amanda Silver (and Josh Friedman and Shane Salerno sharing story credit), The Way of Water is another crowd-pleasing Cameron banger about family, nature, and the ways they intertwine.

As is the case with most of Cameron’s films, what elevates his work is the bravado of his execution, allowing magnificent beasts and scenery prime real estate on the screen, while large-scale battles have tight spatial and rhythmic coherence. Both never fail to inspire awe. The bioluminescent creatures and caverns aren’t just a dazzling visual to distract us, they work in tandem with the storytelling to create a revelatory experience.

It’s wrong to think of The Way of Water as derivative, even if it heavily recycles its influences from the Western film canon — including the first Avatar. (This is James Cameron yet again telling a story about acceptance and immersion. What new territory is to be found, really?) But there’s something unique in its symbiosis of technical wizardry and dreamlike, pulp-inspired imagination that underpins every minute of this three-hour-plus runtime. Its length never feels like a marathon but a scenic endurance hike of natural pauses and the drama of steep elevation.

From start to finish, The Way of Water outdoes its predecessor visually. From the gorgeous sympathetic alien whales, to vicious flying dinosaurs, to the luminous night skies, The Way of Water is stunning to behold. The last 13 years of technical evolution have given Cameron and his team the tools they need to surpass the uncanny valley and close a feedback loop where this mostly CG reality feels a touch more real; the alien Na’vi look, feel, and act authentically alive, their sun-gold eyes brimming with more feeling than the dead-eyed CGI creations of the late 2000s could ever dream of.

The Way of Water’s revolutionary technology only strengthens its political bent. Avatar’s more simplistic “Pocahontas in space” narrative (a technically accurate criticism that misses the point) is surpassed by The Way of Water’s more aggressive pro-Indigenous and pro-ecological activism. However splashy Way of Water is (sometimes too much for its own good), it nakedly lays bare the sins of Western imperialism in far more uncompromising terms. Sure, it may be rich coming from Cameron, himself an affluent white man who convinced the world’s most powerful studio to front him millions so he can play with IMAX cameras in swimming pools. But Cameron has enough artistic grace to make a winter blockbuster feel richer than your typical popcorn fare.

Gorgeous inside and out, Cameron’s latest is not perfect. The jarring frame rate changes, which all depend on your viewing format, can result in a mixed experience. And an overload of unresolved narrative tension is obviously brute-forcing a third installment (of five planned) into existence. But on its terms, Avatar: The Way of Water is impervious to skepticism regarding Cameron’s brand of universally appealing storytelling and his historically proven gravitational pull that lures us into dark rooms with big, bright screens.

Re-entering Pandora now, it is no mystery how Avatar made all those billions years before The Avengers did. Even if the movie’s politics weren’t so cheerfully pleasant, its stands alone as a stunning reminder of what escapist cinema used to be — and still can be.

Avatar: The Way of Water opens in theaters on December 16.