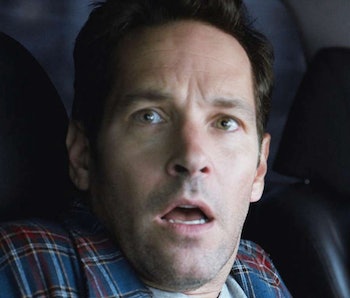 On the NBC sitcom The Good Place, actor William Jackson Harper played a nervous wreck of a man whose brain brimmed with brilliance. Now, Harper might be bringing a big brain to the Marvel Cinematic Universe.

On Thursday, Variety reported that Harper is in the upcoming Ant-Man and the Wasp: Quantumania, which will open in theaters on February 17, 2023. The outlet says the role is “a closely guarded secret,” which could mean a prominent role for all of the MCU, or a clever misdirect. Either is typical of Marvel, and either is just as exciting given Harper’s talents.

Little else was revealed in the story, with Marvel refusing to comment. But after Variety published the story, Marvel fans on social media began speculating that Harper might play Reed Richards, the genius leader of the Fantastic Four who can stretch his anatomy. The role was previously played by Ioan Gruffudd in two Fantastic Four films from the 2000s, Miles Teller in the maligned 2015 reboot, and John Krasinski in an apparent one-off role in this year’s Doctor Strange in the Multiverse of Madness.

Adding fuel to the speculative fire is that Jonathan Majors is playing Kang the Conqueror, primed to be the next major villain of the MCU for the 2025 movie Avengers: The Kang Dynasty. In comics lore, Kang hails from the future and is a distant descendant of Reed Richards. He gets his human name, Nathaniel Richards, from Reed’s father.

With Majors playing Kang, who’s historically been white in the comics, there are strong suspicions that Harper may be his ancestor, and therefore the first known actor starring in 2025’s Fantastic Four. The movie will be the fourth attempt at a lasting adaptation of the Fantastic Four comics, but the first to be produced by Marvel Studios.

The secrecy with which Marvel is guarding Harper’s role aligns with the usual strategies Marvel employs. Marvel likes to toy with its audience, be it misleading shots in trailers or casting actors in twist roles. Rumors that Evan Peters would reprise his version of Pietro from the X-Men films in WandaVision, for example, wound up being a giant misdirect, with his role actually being an out-of-work actor with the silly name of Ralph Bohner. Harper’s role might be a secret, but that doesn’t mean he’s Reed Richards. He could be another character in the Quantum Realm, or another employee at Baskin Robbins.

But if Harper is Reed Richards? With everything involving the Fantastic Four bound to generate headlines, it’s obvious why Marvel wouldn’t just announce Harper as Mister Fantastic in a Thursday night news dump. The casting of a major character like Richards is something Marvel would save as a surprise in its movies, or announce on stage at Comic-Con. With the last Marvel project of 2022 being November’s The Guardians of the Galaxy: Holiday Special on Disney+, it’s understandable Marvel wants to wait until the new year before making an epic resolution.

Ant-Man and the Wasp: Quantumania will be released in theaters on February 17, 2023.