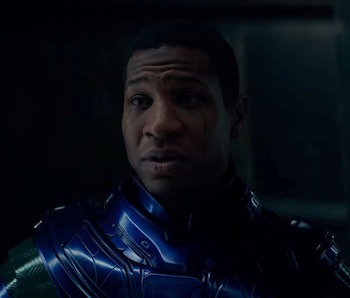 Kang the Conqueror is coming to the Marvel Cinematic Universe, and it will be Ant-Man’s fault.

On Monday, Marvel Studios released the trailer for Ant-Man and the Wasp: Quantumania. Set to Elton John’s “Goodbye Yellow Brick Road,” the next movie in the Ant-Man film series — still directed by Peyton Reed — continues the story of Scott Lang and Hope van Dyne in the aftermath of Avengers: Endgame. The movie is set for release on February 17, 2023.

This time, Ant-Man (Paul Rudd) and the Wasp (Evangeline Lily) are joined by Scott’s daughter Cassie, who is growing up to be a superhero of her own (played by actress Kathryn Newton, replacing Emma Fuhrmann from Endgame). When Cassie creates a way to signal the Quantum Realm, things go awry and the entire Ant-Man gang, including Hank Pym (Michael Douglas) and Janet van Dyne (Michelle Pfeiffer) gets zapped back into the Quantum Realm.

But more than just a kaleidoscopic dimension from Jack Kirby’s fever dreams, the Quantum Realm is now a fully thriving miniature civilization. And none other than Jonathan Majors’ Kang seems to claim it as his domain. Chillingly, Kang tells Scott that the Quantum Realm isn’t what he thinks it is, and even Kang wants out of it.

You can watch the trailer below.

Diverting from the comic heist flavors of both the first Ant-Man (2015) and the sequel Ant-Man and the Wasp (2018), Quantumania is shaping up to be a more serious science-fiction odyssey with landscape imagery lifted from paperback novels and vintage comics. Though the film’s opening will explore Scott’s amusing brush with fame as an Avenger — comedy icons like Bill Murray and that guy from I Think You Should Leave appear in minor roles — there is an overwhelmingly somber tone in Quantumania.

The movie is also a dramatic stylistic departure for Peyton Reed, who prior to the MCU directed comedies like Bring It On (2000), The Break-Up (2006), and Yes Man (2008). While Reed has also directed episodes of The Mandalorian, Quantumania will have Reed using characters and settings he’s now deeply familiar with and taking it all into new creative territory.

The new tone for Quantumania is probably important for one character: Kang, first played by Majors (as “He Who Remains”) in last summer’s streaming series Loki. Kang the Conqueror is poised to be the MCU’s next major villain after Thanos, with movies like Avengers: The Kang Dynasty and possibly Avengers: Secret Wars centered around the Avengers’ battle with Kang. It’s probably important the MCU debut Kang in a style befitting his stature. (Remember, it took years of Thanos pummeling the Avengers before the MCU could have some fun with him.)

While Ant-Man will probably find a way to claim victory over Kang, his presence in The Kang Dynasty means it’ll probably be a short-lived one for Scott. This might also mean bad things for Ant-Man. In 2015, Paul Rudd signed a contract with Marvel Studios for three Ant-Man movies, plus two more Marvel pictures already fulfilled. The math means Quantumania might be Paul Rudd’s last appearance as Ant-Man, though potential contract renewals aren’t out of the question.

Marvel’s Phase Four ends this year with Black Panther: Wakanda Forever, and will begin anew with Quantumania in February. It’s appropriate that the beginning of a new era for Marvel begins with nose dive into a new dimension — and a face-to-face meeting with a new villain.

Ant-Man and the Wasp: Quantumania will open in theaters on February 17, 2023.