‘Avengers 5:’ Kang could unleash multiversal madness in one brilliant move

“The Avengers must die!” 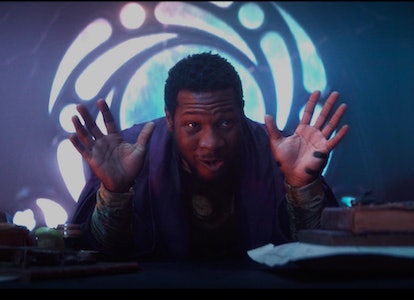 Kang the Conqueror is a major presence in the Marvel Cinematic Universe.

After Jonathan Majors’ first appearance as He Who Remains, a relatively tame variant of the intergalactic, multiversal villain, there’s no telling who else will show up between now and Kang’s official debut in Ant-Man and the Wasp: Quantumania.

With two whole years to wait, how will the MCU stoke anticipation for the new villain? Perhaps the answer lies in this little-known Kang variant — and sets up one huge Avengers clash.

The Scarlet Centurion sounds a bit like a cheesy Batman villain, but he’s actually one of the least known Kang the Conqueror variants.

The Scarlet Centurion was born when Rama-Tut, the Kang variant who posed as an ancient Egyptian pharaoh, encountered Dr. Doom (who may or may not be related to Kang himself). Rama-Tut decided to adopt a guise similar to Dr. Doom, and thus created the variant known as the Scarlet Centurion.

Now equipped with a new identity, he initiated a plan to eradicate the Avengers — a plan that would directly track with the MCU Phase 4’s multiverse exploration.

The Scarlet Centurion created an alternate version of the Avengers by traveling back in time to when they were just starting out. By doing this, he created an alternate reality, then using a mind ray to control these Avengers variants into believing all superpowered beings other than themselves needed to be killed, which pitted them against the “Sacred Timeline” Avengers.

In the MCU, this would make the perfect plot for an Avengers film. In an era where most of the Avengers have been given their own solo projects, there isn’t much character left to explore. The solution? Evil variants of the Avengers we know and love.

“Evil versions” is a comic book cliché, sure, but so far Phase 4 has entirely focused around comic book clichés — the multiverse, time travel — and turning these into epic sagas. Can’t a “darkest timeline” Avengers twist get the same treatment? After all, Nebula in Avengers: Endgame served as a soft launch for this very trope.

In the span of the entire Marvel Universe, the Scarlet Centurion and this storyline contain all the beats of a great Avengers team-up movie: a chilling villain, otherworldly technology, and (of course) multiverse theory.