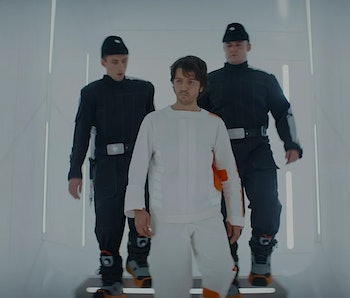 One thing we learned in last week’s Andor episode, “Narkina 5,” is that prison life in an Imperial factory facility is a monotonously ordered affair without much hope of escaping. But since we already know Cassian’s heroic fate as it relates to Rogue One: A Star Wars Story, it’s a foregone conclusion that he’ll make it out alive before his six-year sentence ends. Hopefully, Andor Episode 9 will reveal how that happens.

Here’s everything you need to know about Andor Episode 9, from release date and start time plot, cast, and more. But first...

What happened in Andor Episode 8?

Cassian’s orientation at the Imperial prison planet of Narkina 5 gets off to a bad start when they zap him with electricity upon arrival using a system of electrified floors that runs throughout the facility. He spends the next few days working with a small team of fellow prisoners building unspecified machinery for the Empire as part of a prison-wide competition. However, our spy quickly becomes aware of how this system works and begins to spot potential weaknesses.

We also saw Ruescott Melshi (Duncan Pow) as one of Cassian’s work crew. Ruescott will go on to join our mercenary hero in his ill-fated Rogue One mission.

Meanwhile, Imperial Security Bureau’s Supervisor Meero is alerted to Syril Karn’s incessant inquiries about Cassian Andor and brings him in for questioning. Karn explained that Andor is a person of great interest after murdering two Pre-Mor agents, trying to sell stolen goods, and working with a team that might have insurgent leanings. Karn also says he could identify Luthen (the Rebel leader the Empire only knows as Axis) if he heard his voice again.

And on Coruscant, Mon Mothma continues her fundraising efforts with Tay Kolma as the Empire clamps down on security and questionable transactions after the embarrassing theft of the Aldhani Garrison’s payroll.

Finally, tired of hiding in the shadows in the guise of an antiquities dealer, Luthen Rael heads for Segra Milo where he meets with the grizzled Partisan leader from Rogue One, Saw Gerrera. Not yet impaired as severely as in the 2016 film, it stands that those disabilities were obtained in this upcoming stretch of the Alliance’s formation.

As the episode ends, Bix Caleen is hauled in for questioning by Dedra Meero as we hear the sinister hum of an Imperial torture droid closing in.

What is the Andor Episode 9 release date?

What is the release time for Andor Episode 9?

Andor Season 1 contains a total of 12 episodes. After this week’s rebellious outing there are just three episodes left.

What is the plot for Andor Episode 9?

One of the great questions raised from Episode 8 is exactly what pieces of Imperial equipment Cassian and his prison team are building under the direction of his unit supervisor Kino Loy (Andy Serkis), and how that might play out into the future.

Luthen’s Rebel Alliance holds out hopes of gaining Gerrera’s support, but the veteran soldier struggles to stay neutral in the storm of conflicting factions. When will he leap into the fray with both boots and what will the catalyst be for his involvement? Perhaps Cassian’s rescue?

Vel Sartha still has her orders to hunt down Cassian as a necessary casualty in the fight for freedom. Will she flip and help extricate him from his supermax hell for more daring misadventures as a rebel spy? And how will Bix hold up under Supervisor Meero’s questioning about the identity of Cassian and Luthen Rael?

Who stars in Andor?

Is there a trailer for Andor Episode 9?

Sadly, Disney+ does not deliver any sneak peeks of specific upcoming episodes so we’re left to our own devices by watching the most recent Season 1 trailer released back in September.

Yes, Cassian Andor’s inspiring story will live on for one more season per writer/creator Tony Gilroy (The Bourne Series). According to a September interview, Gilroy announced that the sophomore season will be shooting from November to August before undergoing post-production work that will last until 2024 when it should be back for more space opera awesomeness.