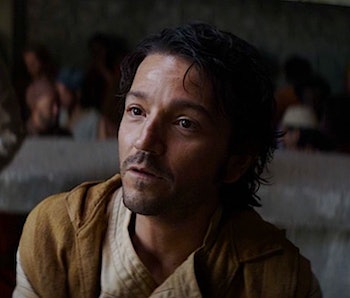 After what felt like an entertaining epilogue to Episode 6’s big heist, Andor is gearing up for another big adventure with Episode 8. We still don’t know much about where the Star Wars series is headed next, but after Episode 7’s cliffhanger ending, Cassian Andor (Diego Luna) has his work cut out for him before he can rejoin the rebellion.

So what do we know about Andor Episode 8? And more importantly, what time will Andor Episode 8 be released on Disney+. Here’s everything you need to know.

What happened in Andor Episode 7?

In “Announcement,” Cassian returned to Ferrix to unsuccessfully convince Maarva to leave with him. He then says goodbye to Bix Caleen before vanishing somewhere off-grid.

Meanwhile, in the aftermath of the Aldhani Garrison Heist, the Imperial Security Bureau is intensifying efforts to stomp out any embers of rebellion they can find. Supervisor Meero took the lead in this hostile endeavor and asserted her dominance in all matters concerning a dangerous uprising.

In a flashback, we also saw how Cassian’s adoptive father, Clem Andor, was murdered during an Imperial show of force on Ferrix, which lead to his body being hung in the square and instilling hate within young Cassian.

On Coruscant, Vel Sartha was tasked by Luthen Rael’s gallery concierge Kleya Marki to take out Cassian due to his extensive knowledge of the budding rebellion and Luthen’s identity. Meanwhile, Mon Mothma endured an uncomfortable dinner party with snobby elitist friends and hollow politicians as she conducted business to gain added funding for her “charitable cause.”

Finally, Cassian was unjustly harassed and arrested on the beach resort world of Niamos where he was given a harsh six-year sentence for trumped-up charges. Is it time for a classic Star Wars jailbreak? The cards are certainly on the table so let’s deal out the details on Andor Episode 8!

What is the Andor Episode 8 release date?

What is the Andor Episode 8 release time?

Disney+ rolls out new movies and TV shows at midnight Pacific, which is 3 a.m. Eastern.

Disney+’s Andor Season 1 is a full 12-episode run. After this week’s fresh chapter there are just four episodes remaining.

What is the plot for Andor Episode 8?

At the conclusion of Episode 7, we saw Cassian wrongly sentenced to six years in jail for civil disruption, anti-Imperial speech, and other trumped-up charges. It will be interesting to see how the penal system works within the Galactic Empire and who he might encounter in the slammer.

With Vel Sartha now being tasked with tracking the skilled spy down, this could be an opportunity for a cool prison breakout storyline that the franchise does so well. Will Vel carry out her homicidal orders and try to murder Cassian, or will she set him free from the clutches of the Empire?

The ambitious Dedra Meero, smug from her scathing counterattack on Supervisor Blevin, now has momentum for her determined quest to identify patterns in the resistance’s movements on Ferrix and beyond. Plus, we still believe Syril Karn, now in his boring cubicle at the Bureau of Standards, will somehow team up with her efforts to find Cassian and ferret out more rebel scum.

Also, will Cassian keep searching for his missing sister, and doesn’t it feel like this is the perfect time to reveal Saw Gerrera and hear one of his inspiring speeches to rally the resistance?

Is there a trailer for Andor Episode 8?

As a rule, Disney does not provide episode teasers or descriptions of upcoming chapters, or even any post-credit snippets to whet our appetites for that matter. But to ingest the awesome power of this Rogue One prequel series, there’s always the official series trailer to set a suspenseful mood.

Andor’s journey depicting the early stages of the Rebel Alliance will indeed be continued for a second season according to writer/creator Tony Gilroy (The Bourne Series). The timeline would bring the rebel spy’s tragic backstory up to the point where he’s recruited for the suicide mission to rip off the blueprints for the Death Star as seen in Rogue One: A Star Wars Story from 2016.