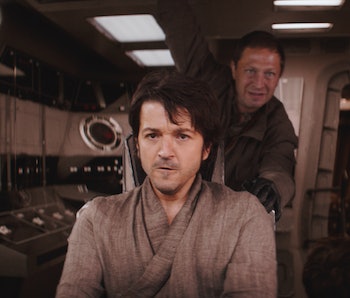 Andor is the story of how one man can change the galaxy, but it’s still very much an ensemble piece. Though Diego Luna drives the action as Cassian Andor, the other characters are just as nuanced and three-dimensional; even the villains.

But now that we’re halfway through Season 1 — and a quarter of the way through the entire show — there’s still no central villain. We’ve seen Andor escape authorities and pull off a heist, and of course there’s the blunt evil of the Empire itself, but what’s next on a personal level? The answer may be hiding in plain sight.

Andor is structured as a series of three-episode arcs, not unlike The Clone Wars. The first arc, which followed Andor as he stumbles into the beginning of the Rebellion while looking to escape a murder charge, was contained in the three-episode premiere back in September.

In those episodes, we met Syril Karn, a Morlana corporate security officer dead set on tracking down Cassian, even if it meant going against his commander. The attempt to arrest Cassian on Ferrix that turned into a violent debacle was pinned on him, and in Episode 4 he lived every young professional’s worst nightmare: Moving back in with his mom.

In Episode 5, Syril’s mother says she’s going to call in a favor to Uncle Harlo to find her son a job. We don’t know much about this mysterious uncle, but he could be the key to Syril’s rise as a major villain. If he gets Syril a job with the Imperial Security Bureau, he could connect with Dedra Meero, the ISB officer looking for the missing Starpath Cassian acquired to kick this whole affair off.

Could the upcoming Episode 7 be dedicated solely to events on Coruscant? Syril and Dedra can swap notes, Luthen has to deal with the aftermath of the Aldhani heist, and maybe we could even get a glimpse of Mon Mothma trying to keep her cover intact at the galaxy’s most awkward dinner party.

It’s worth mentioning that Episode 7 is written by Stephen Schiff, a former writer for the FX spy thriller The Americans, so an episode about the intrigue and office bickering of the Empire’s FBI is suited to him. This fits the claim from Star Wars NewsNet that Episode 7 will be a standalone story, citing Tony Gilroy stating the final two “arcs” will be Episodes 8-10 and 11-12, leaving 7 unassigned.

Schiff isn’t writing any more episodes, which really makes it seem like this episode won’t fit the “arc” structure of the rest of the show. Maybe it will serve the broader story by giving Cassian Andor what he needs most at this point: A nemesis.